Posted by Caitlin
First of all, many congrats to Jaisa who dropped some big news ever-so-casually in last week's post!  I'm basically over the moon and can't stop texting her about it at all hours of the day and night.  I'm just hoping she will share the Instagram picture that she and Charlie used to announce it to their friends... so darling.

Speaking of darling, let's get back to my two year old son.  Smooth transition?  No?  Moving on...

After his second birthday party, Will had a whole lot of thank you notes to get in the mail.  Like last year, I wanted to have him involved in the making of the cards and, like last year, I had a lot of finger paint laying around.  We kicked it up a notch this year, though... 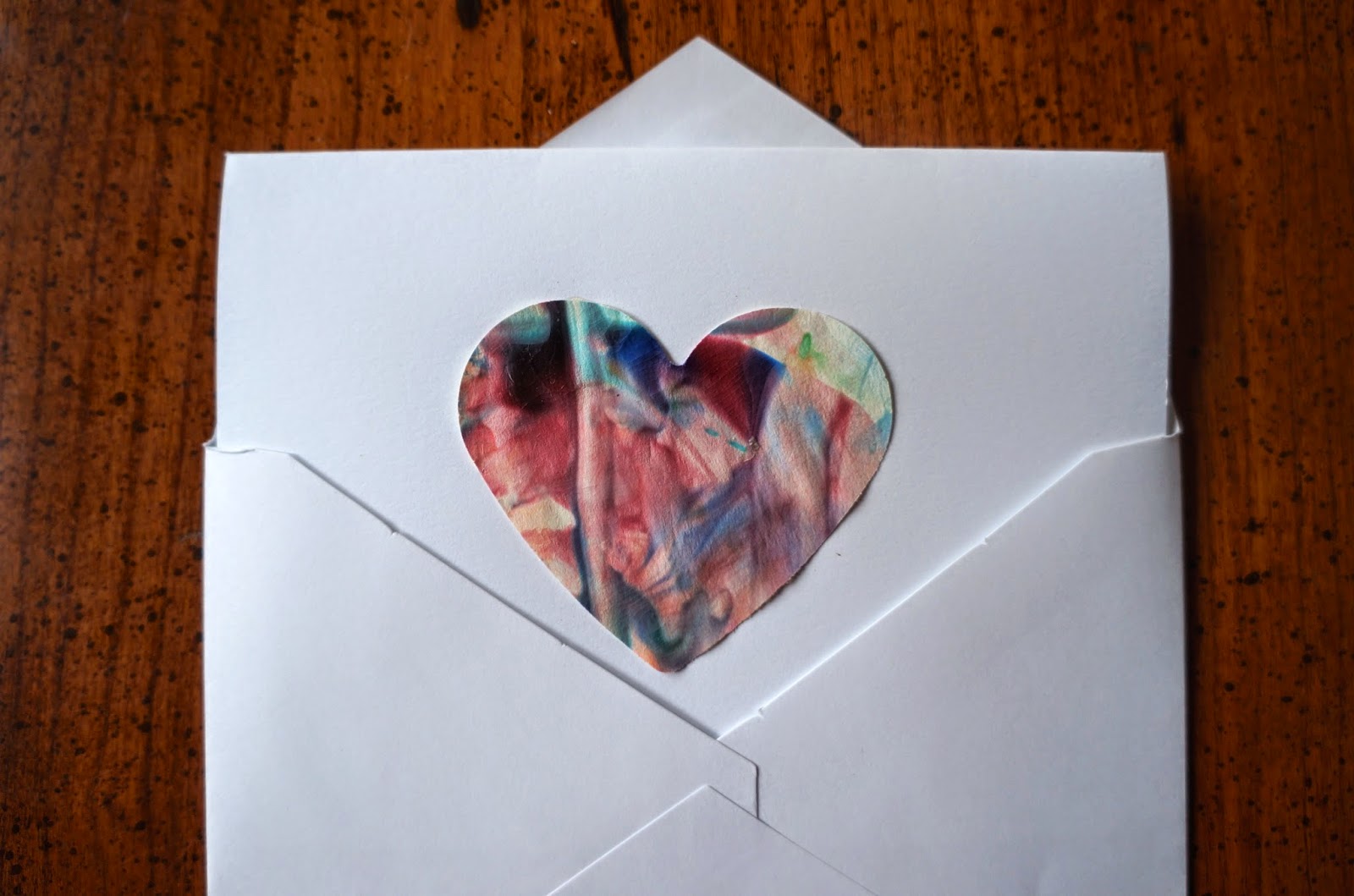 It helps that Will is actually VERY into finger painting now.  I'm not that into it myself and always make excuses for why we shouldn't (it's a huge mess!  it's more hassle than it's worth!  the paints say non-toxic but they're probably loaded with all sorts of sneaky carcinogens!) but a few minutes in it's always apparent that Will is having a blast and it's totally worth it.  Also he isn't eating it, so it could be worse for him, I'm sure. 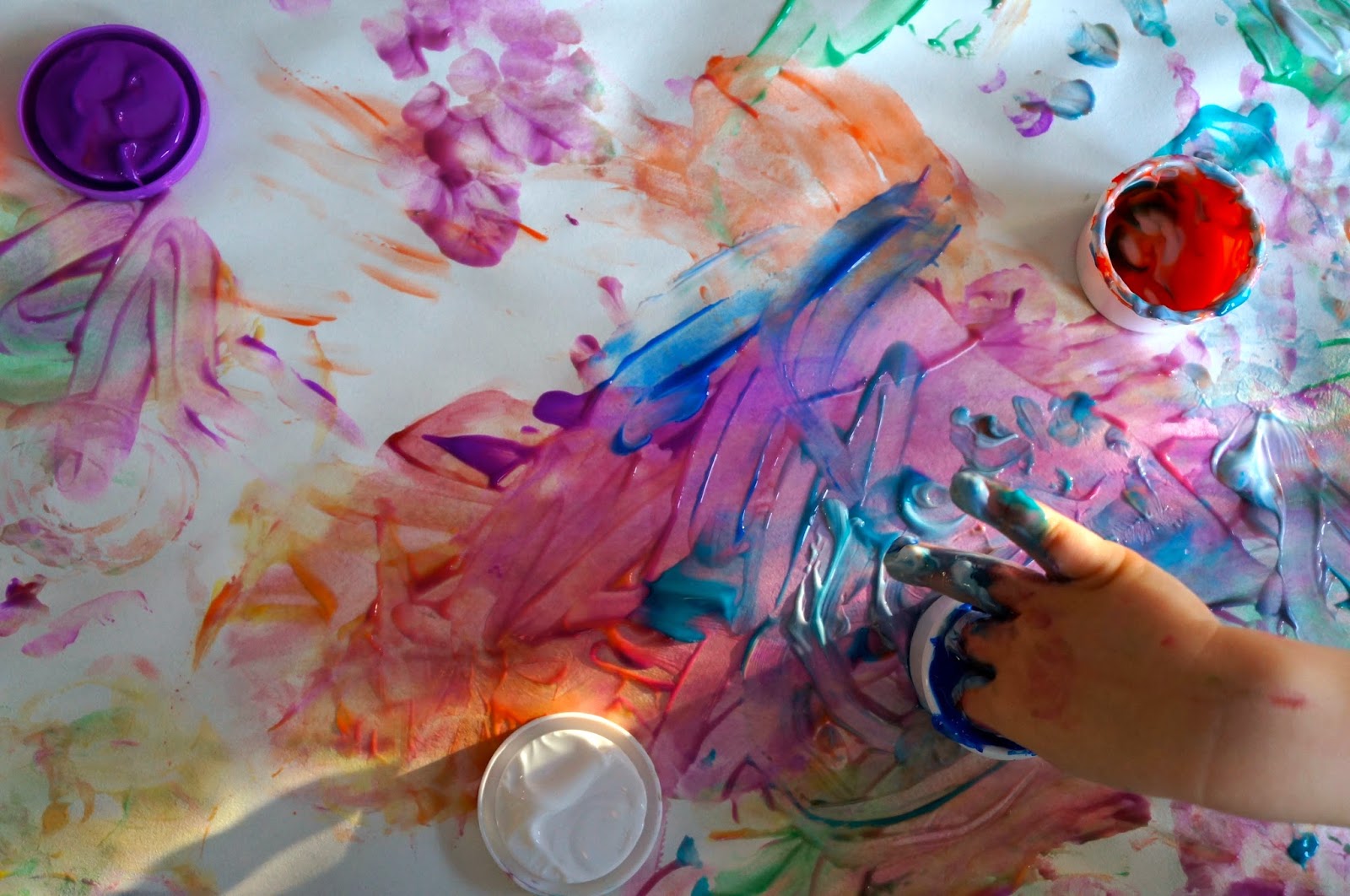 I let him go nuts on a huge sheet of white paper (Ikea paper roll FTW) and when it had dried the next day, used a heart-shaped stamper cutter ("I can't believe we own that thing.  Its ONLY function is to cut out heart shapes?!" -Jesse) to get some hearts we could use on thank you cards. 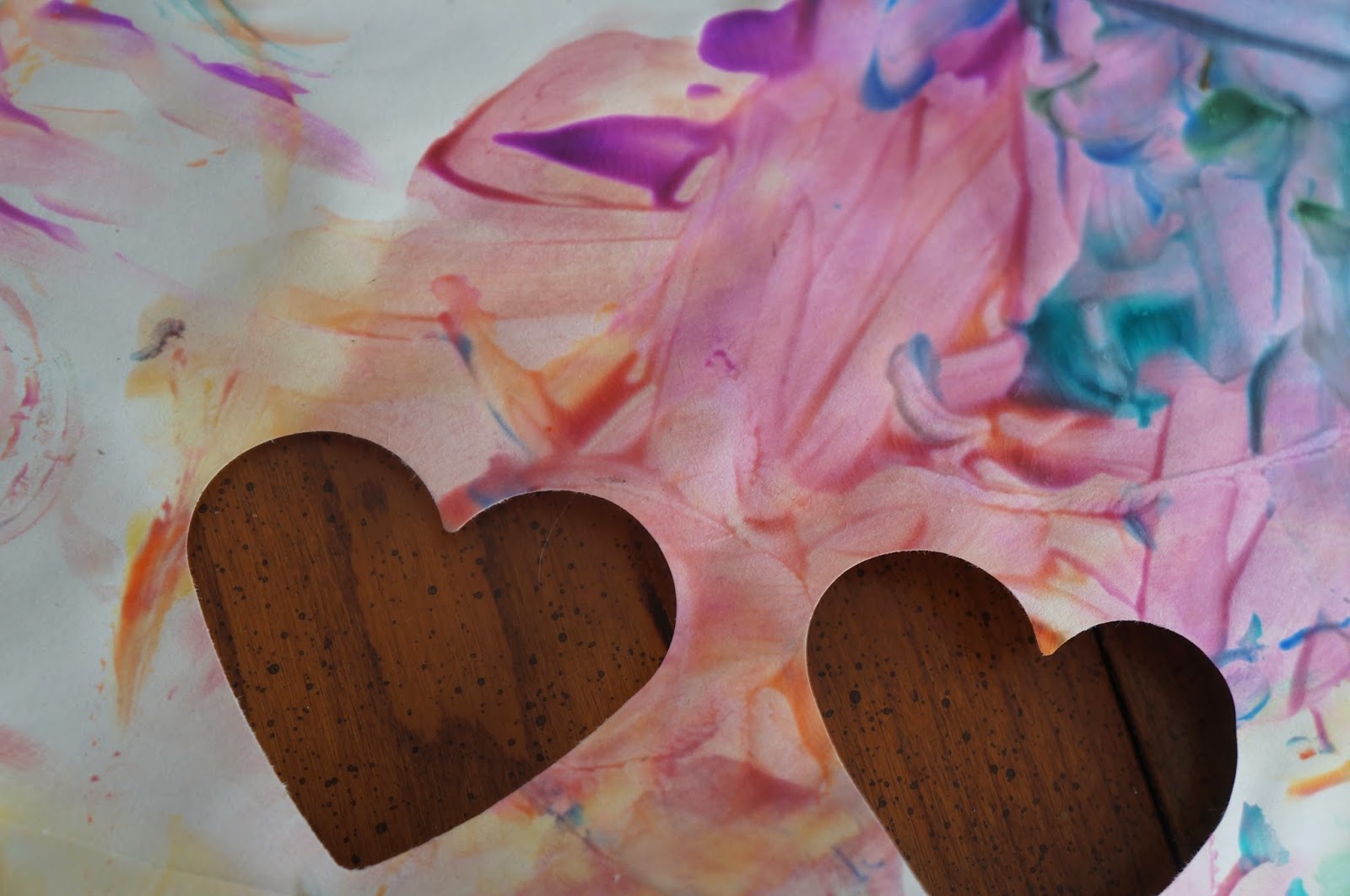 Gluesticked onto blank cards, the hearts were the perfect combination of THANK YOU/I LOVE YOU/I'M SORRY THESE WENT OUT A WEEK LATER THAN I HAD PLANNED.  Everyone got handwritten notes and a bit of Will art. 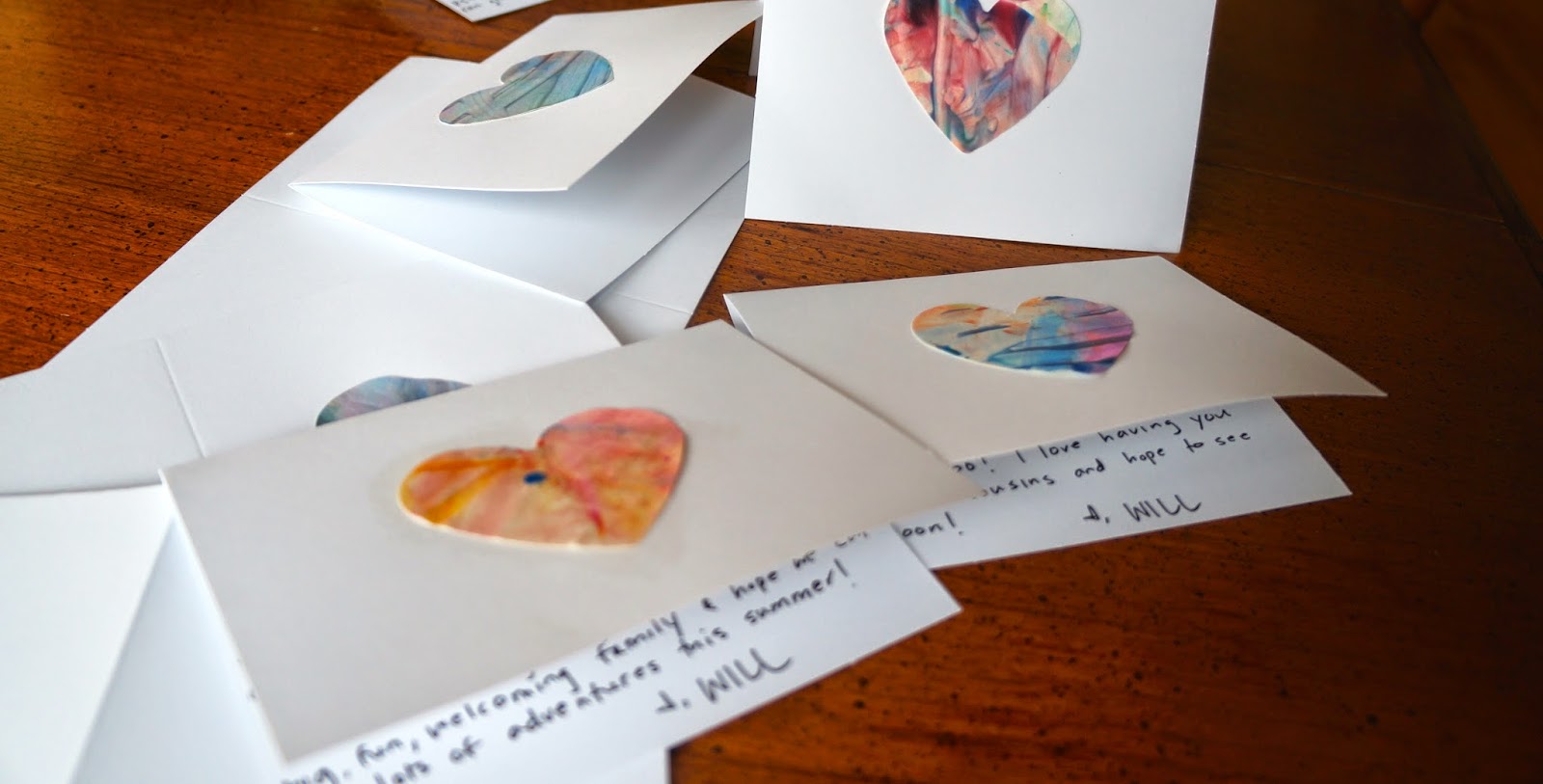 Easy peasy and totally kid friendly.  These could also work as a set of stationery for the grandmothers in your life... Mother's Day is coming!

I want Will to be a thank you note writer when he grows up, so starting early is key.  Thanks again to Will's awesome friends and family... check your mailboxes! 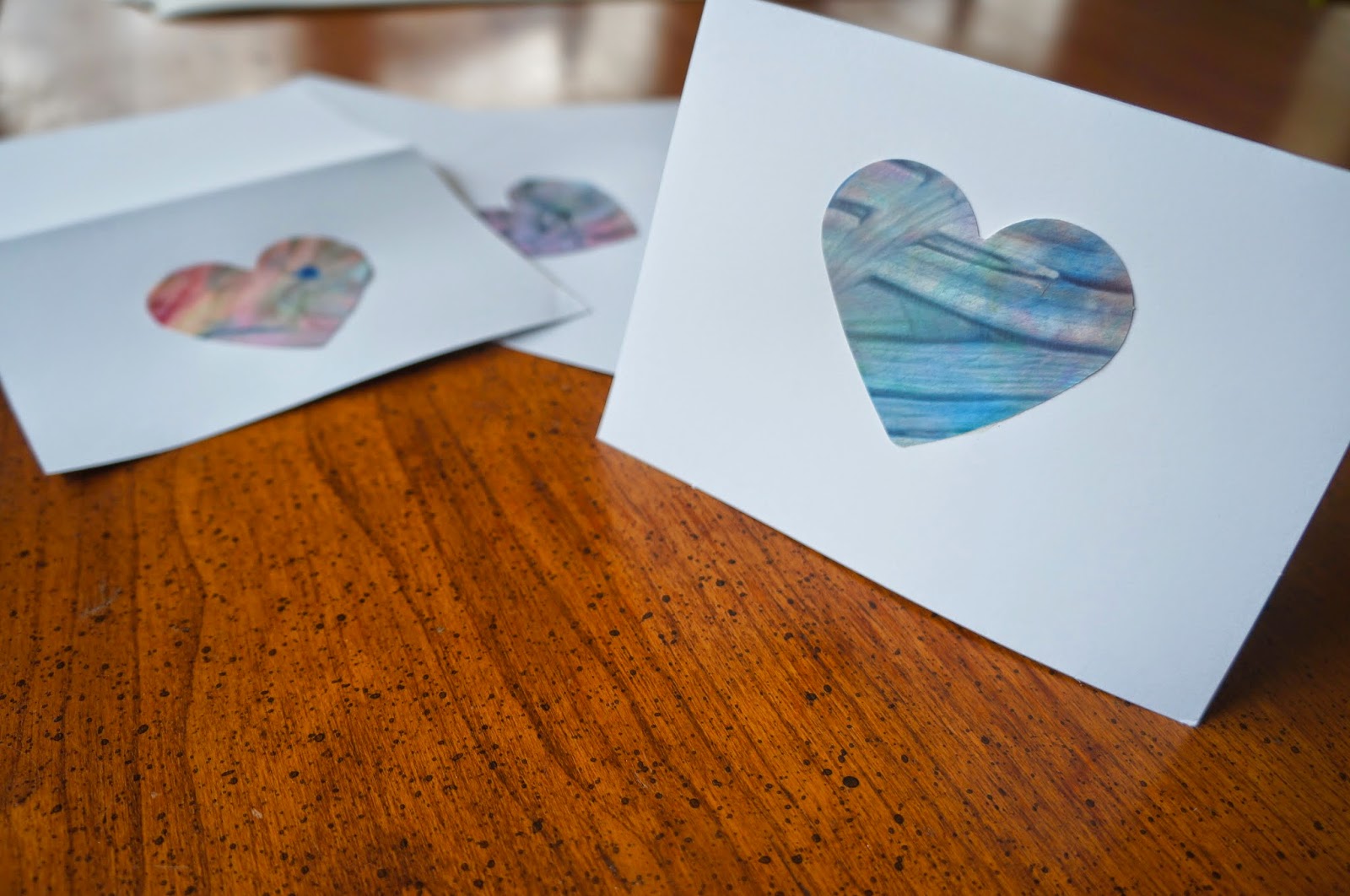 at 9:30 AM
Email ThisBlogThis!Share to TwitterShare to FacebookShare to Pinterest
Labels: Crafty, Homemade Gifts, Homey, Stationery