Posted by Jaisa
Charlie and I are out of control.  At least twice a week, we take the Chicago foodie scene by storm and do something utterly ridiculous.  On Saturday we had dinner at David Burke's Steakhouse and then rounded the weekend out with Chicago's Poutine Fest.  Yes...POUTINE FEST.  I just woke up from a four hour quick nap because I basically ate myself into a coma.  I'll take you on our tour of our Poutine Fest adventure. 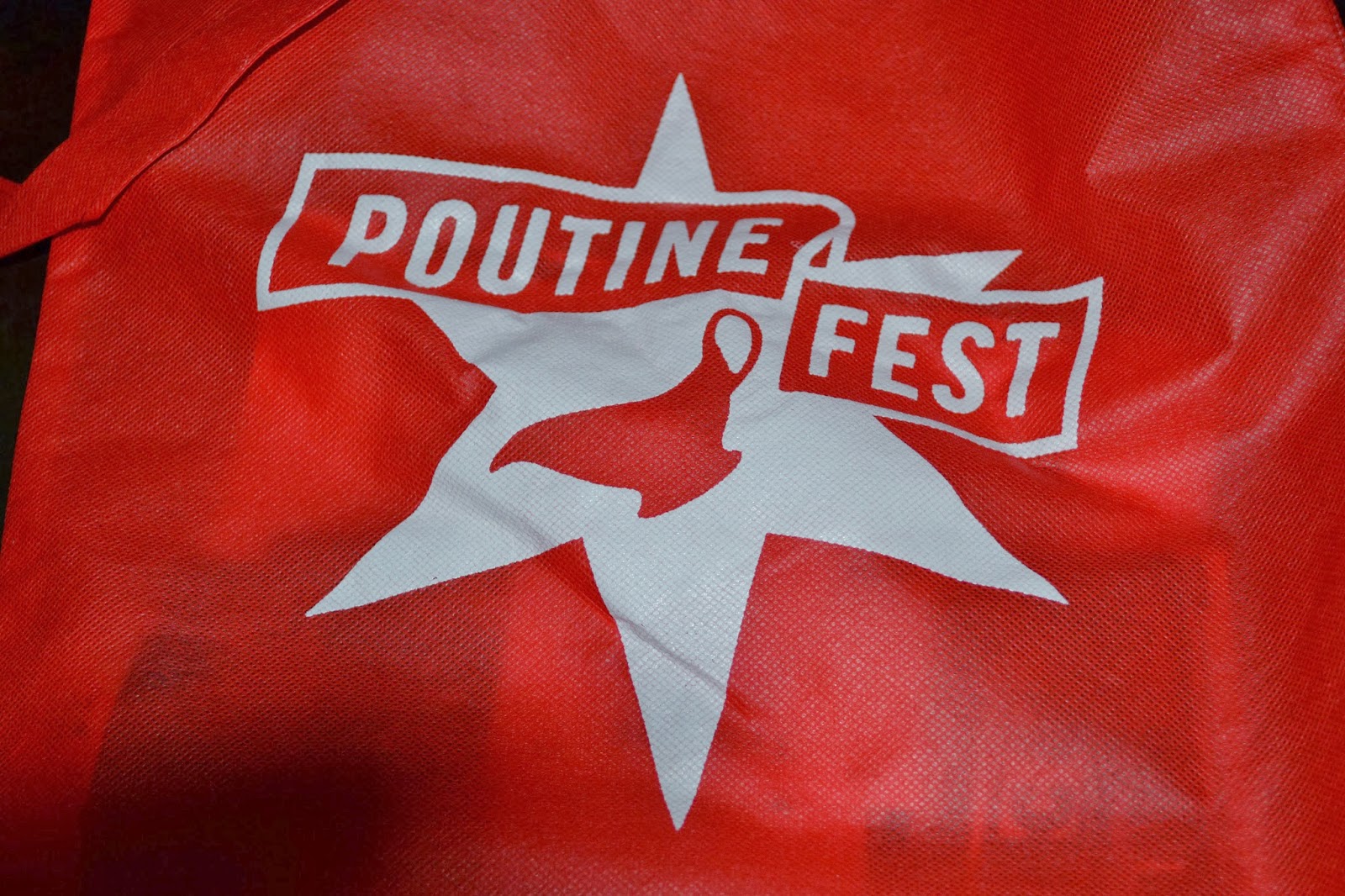 This is Sunday Dinner's Poutine, made with Schmaltz Gravy, Dill Sour Cream, Homemade Pickles, Cheese Curds, and Ranch Chicken Skin Chips. This was my absolute favorite  It was the first one I had all day and the only one I went back in for seconds. The fact I had seconds is just shameful considering I tried several others and washed it down with three beers. 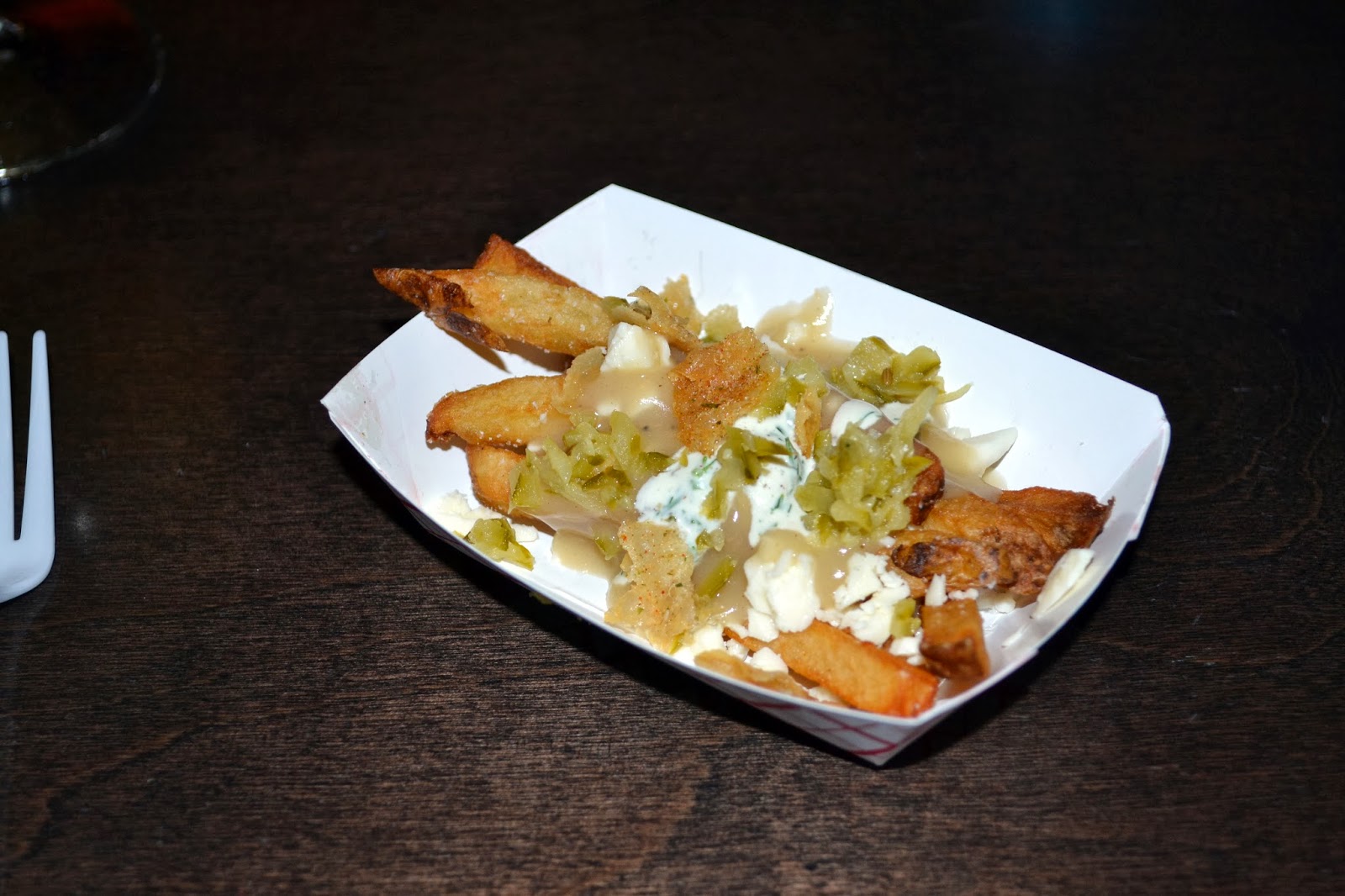 So I'm a huge fan of The Gage.  The brought it with Duck Confit, Pickled Red Onion, Wisconsin Cheese Curds, Jalapenos, and Smoke Box Gravy. What I liked about theirs was that they mixed everything together in a skillet before serving so the curds melted down a bit. 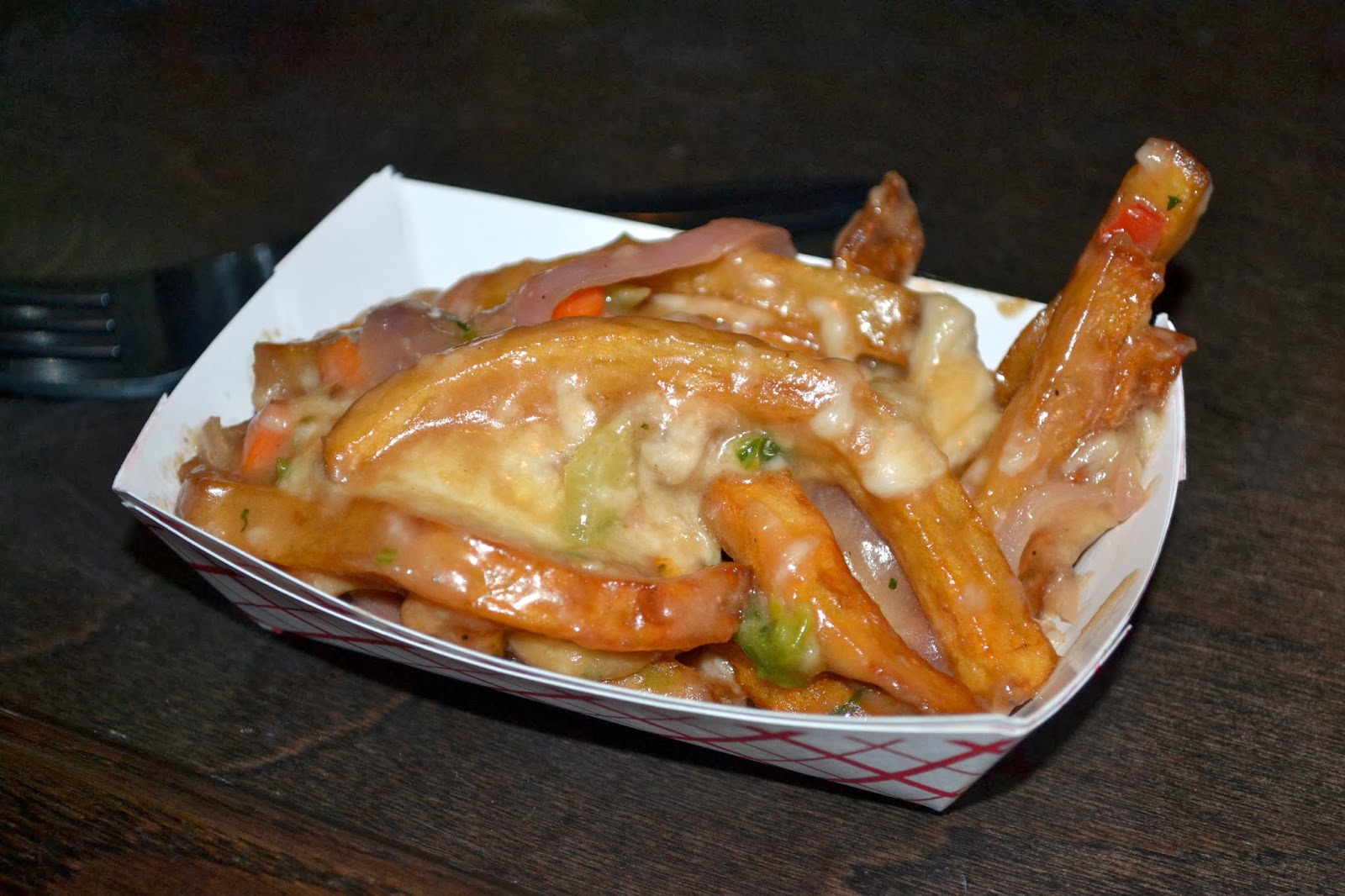 This was The Big Cheese's pirogi poutine.  What a cool idea, right?  Charlie really like this one. They also had the best/most fun staff. 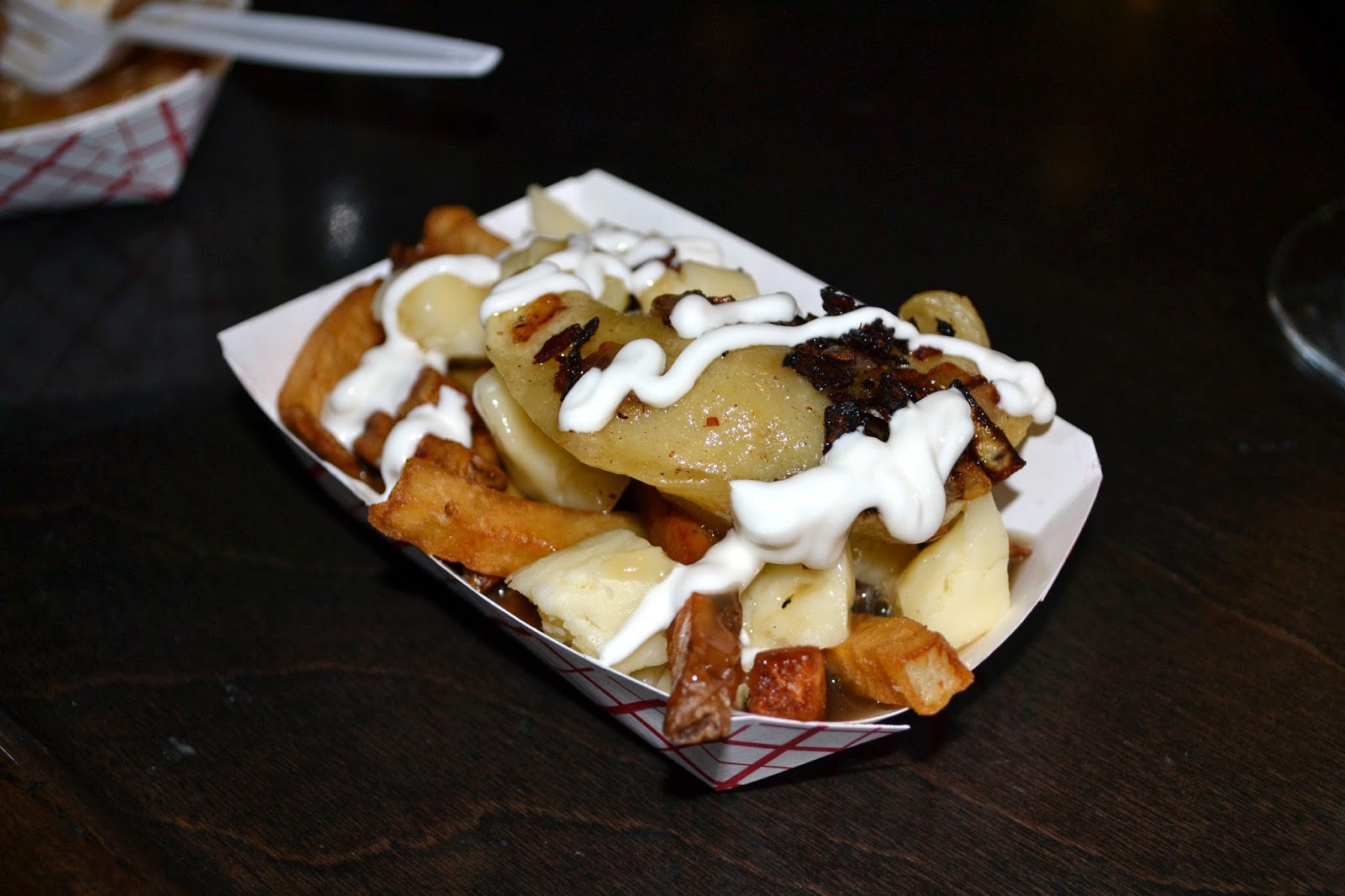 The was Troquet Chicago's Duck Confit Poutine with Duck Cognac Gravy.  Giddy up. 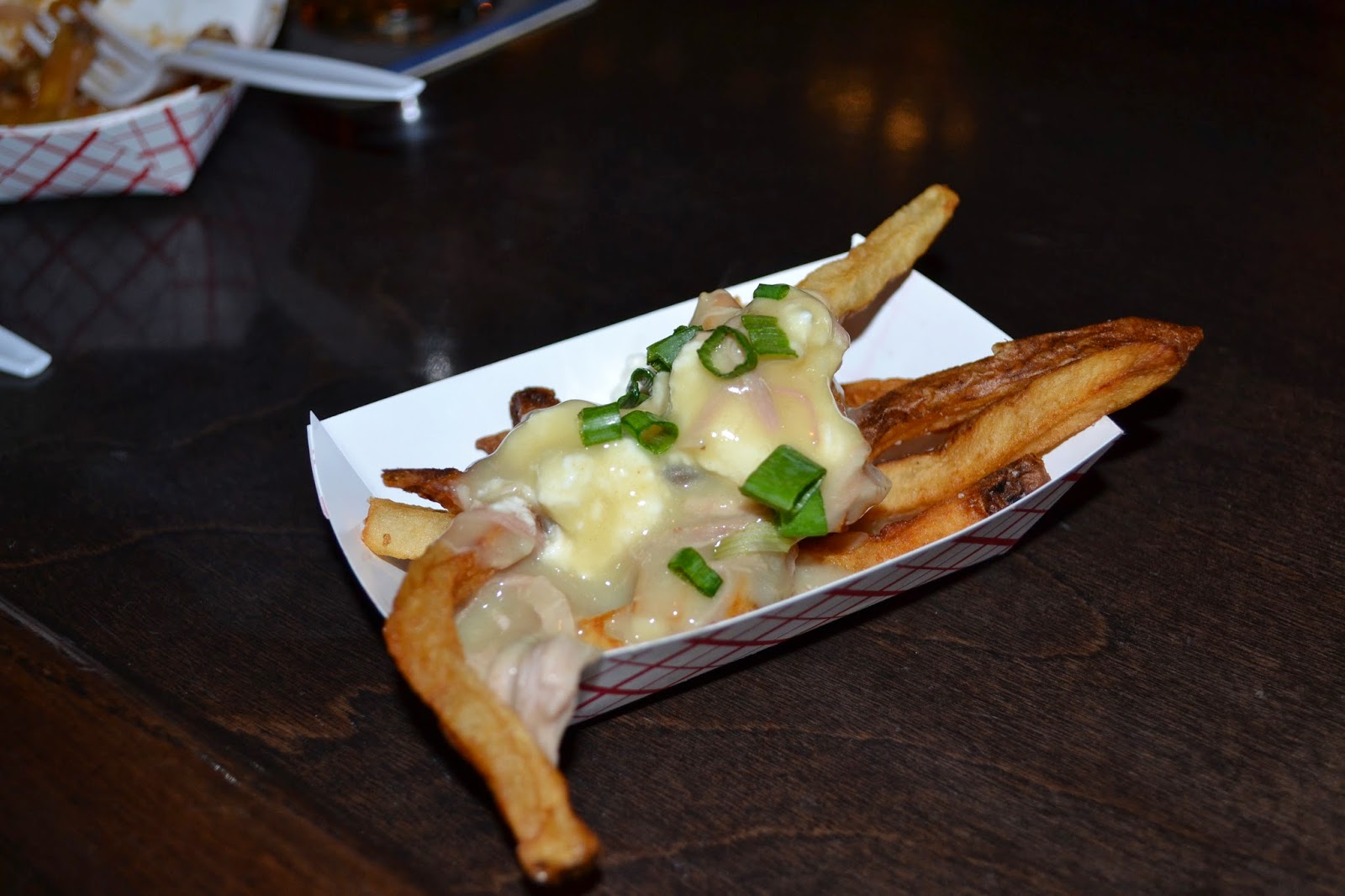 The Green Door holds a special place in my heart.  It's one of those neighborhood bars you can go grab a bite and a few beers and call it a day.  It's also one of the oldest bars in Chicago.  They created an awesome Poutine - Chicago Style with Italian Beef, Sausage Gravy, Curds, and Spicy Giardiniera. 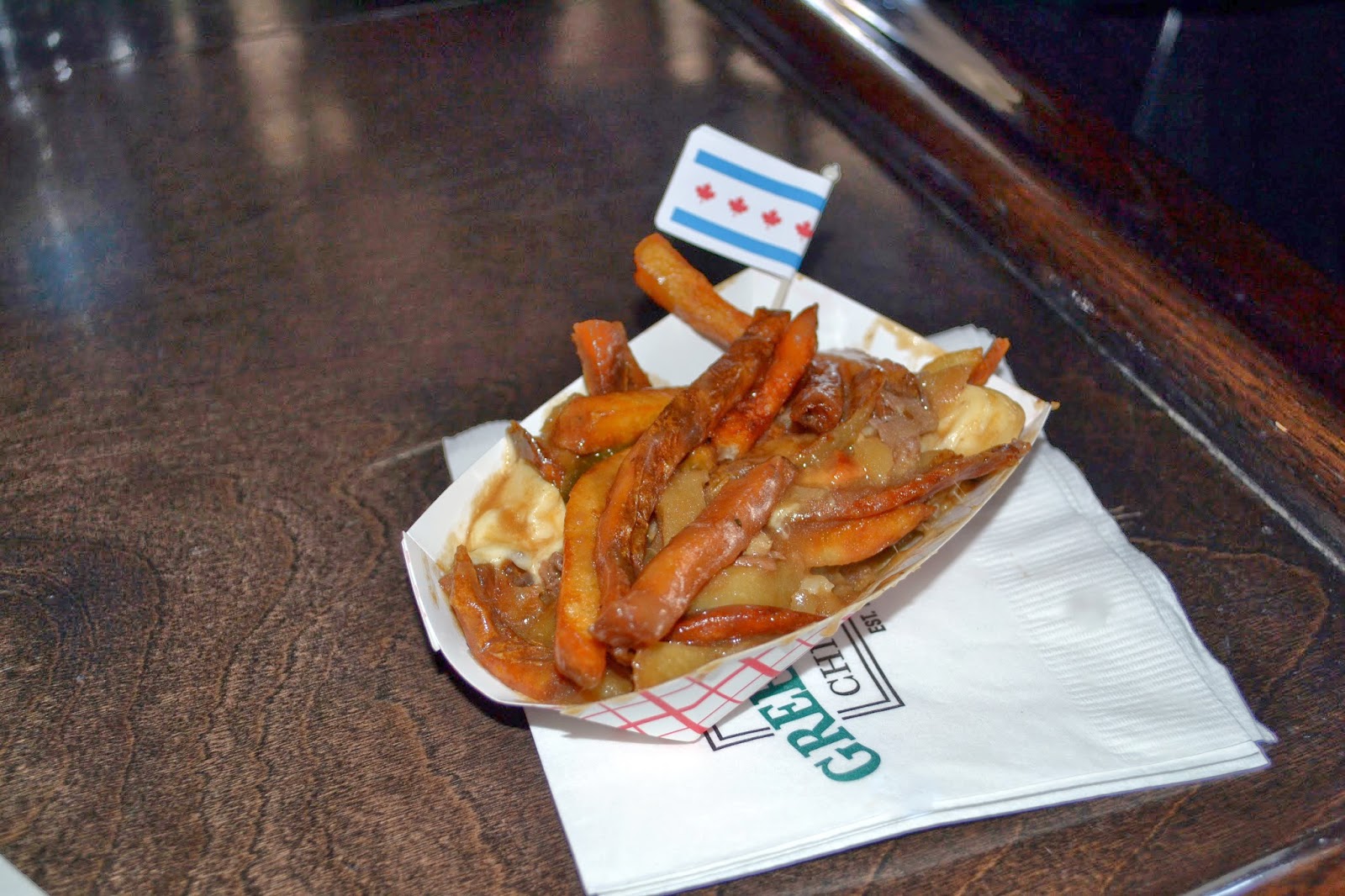 Here was Le Bouchon's french bistro twist on Poutine - Duck Confit, Escargot, and Red Wine Gravy. This was a little too busy for me.  I would have preferred if they either did an escargot and garlic butter poutine, or just went with the duck flavor profile.  Otherwise, it was really good. 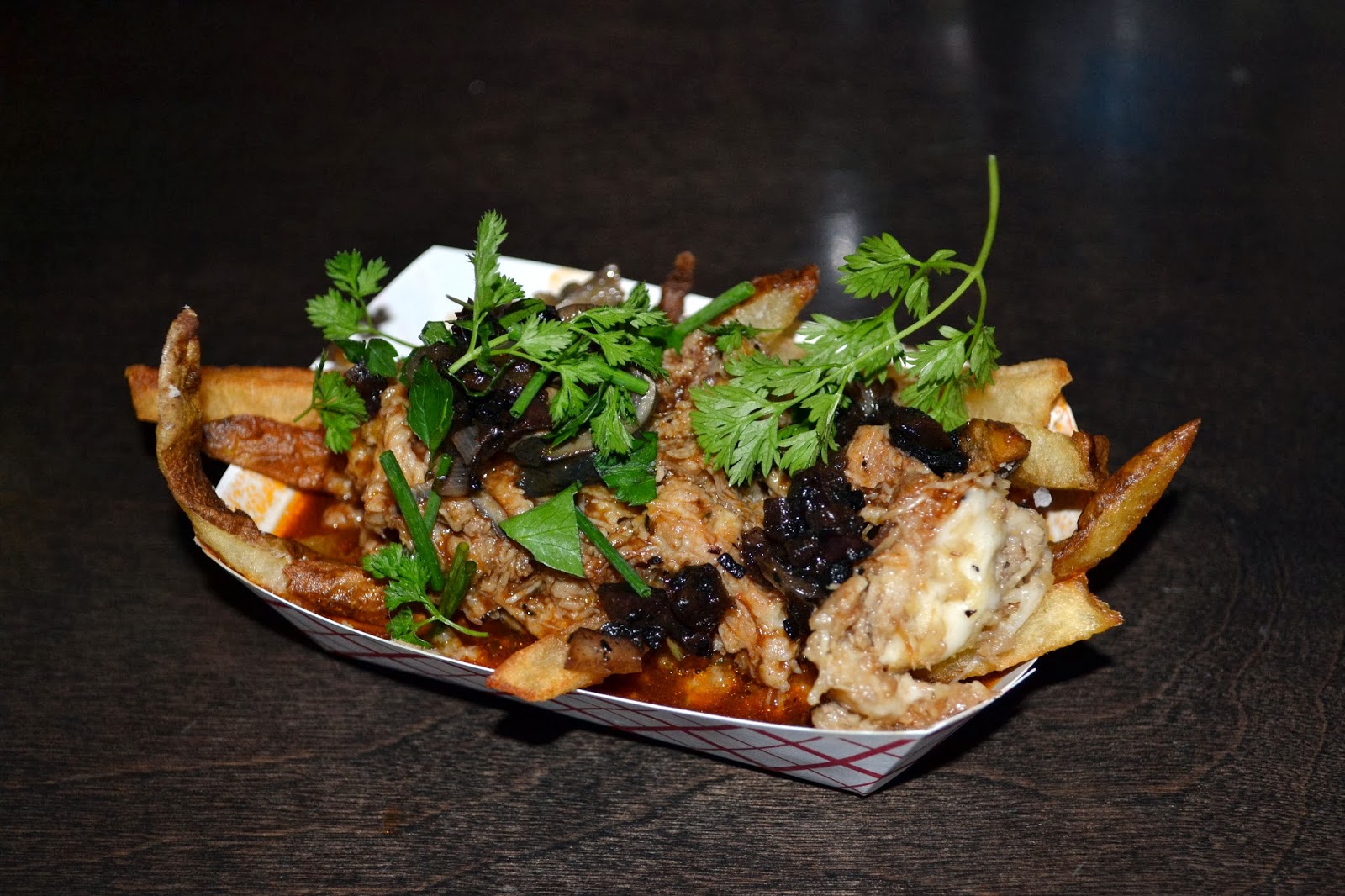 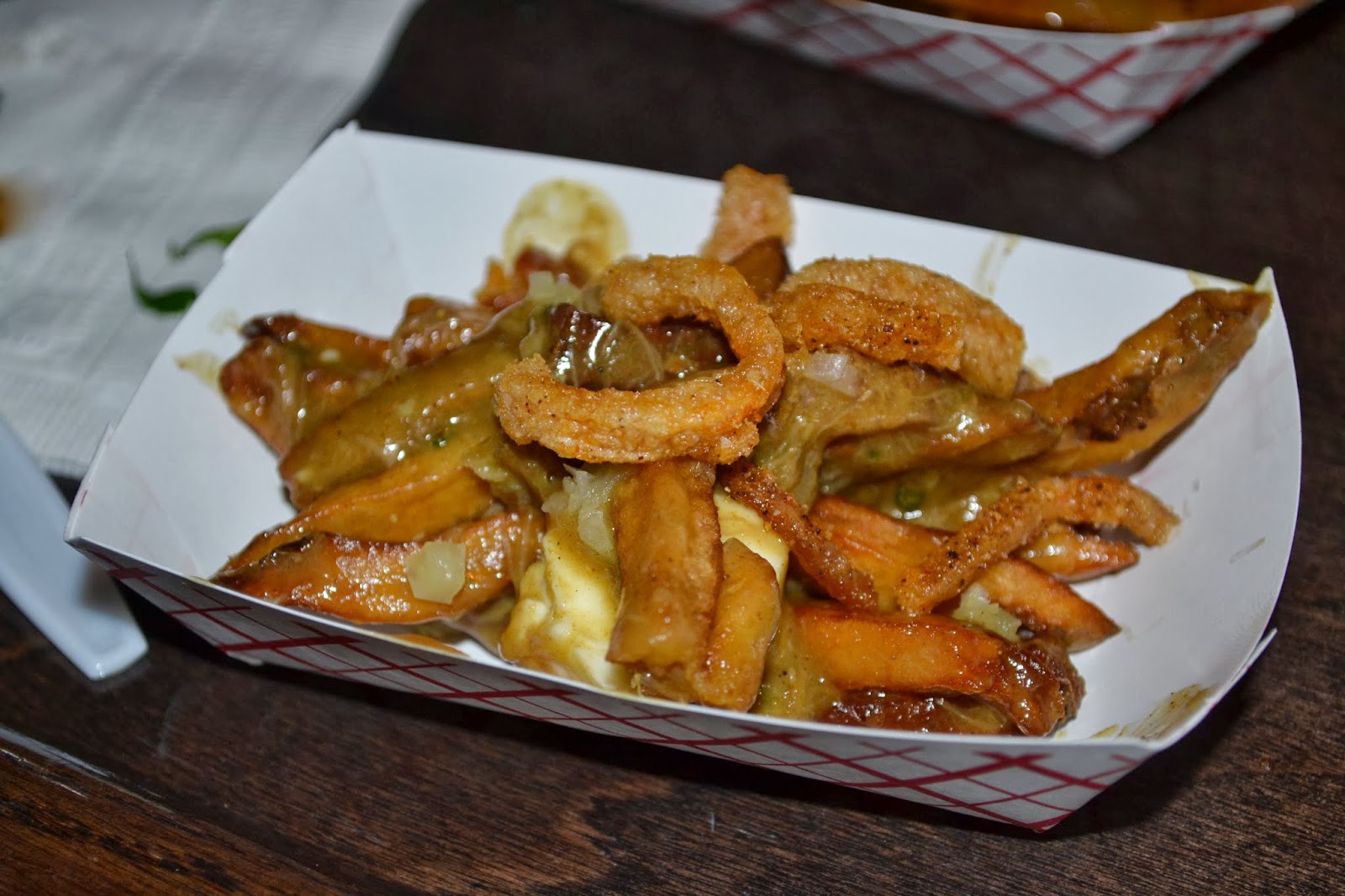 This was soooooo good.  Really.  It was outrageous.  Haymarket Brewing, went cheese curds out with a Braised Beef, Beef Gravy, and Pickled Jalapenos and Red Onions.  YUM to the NOM. 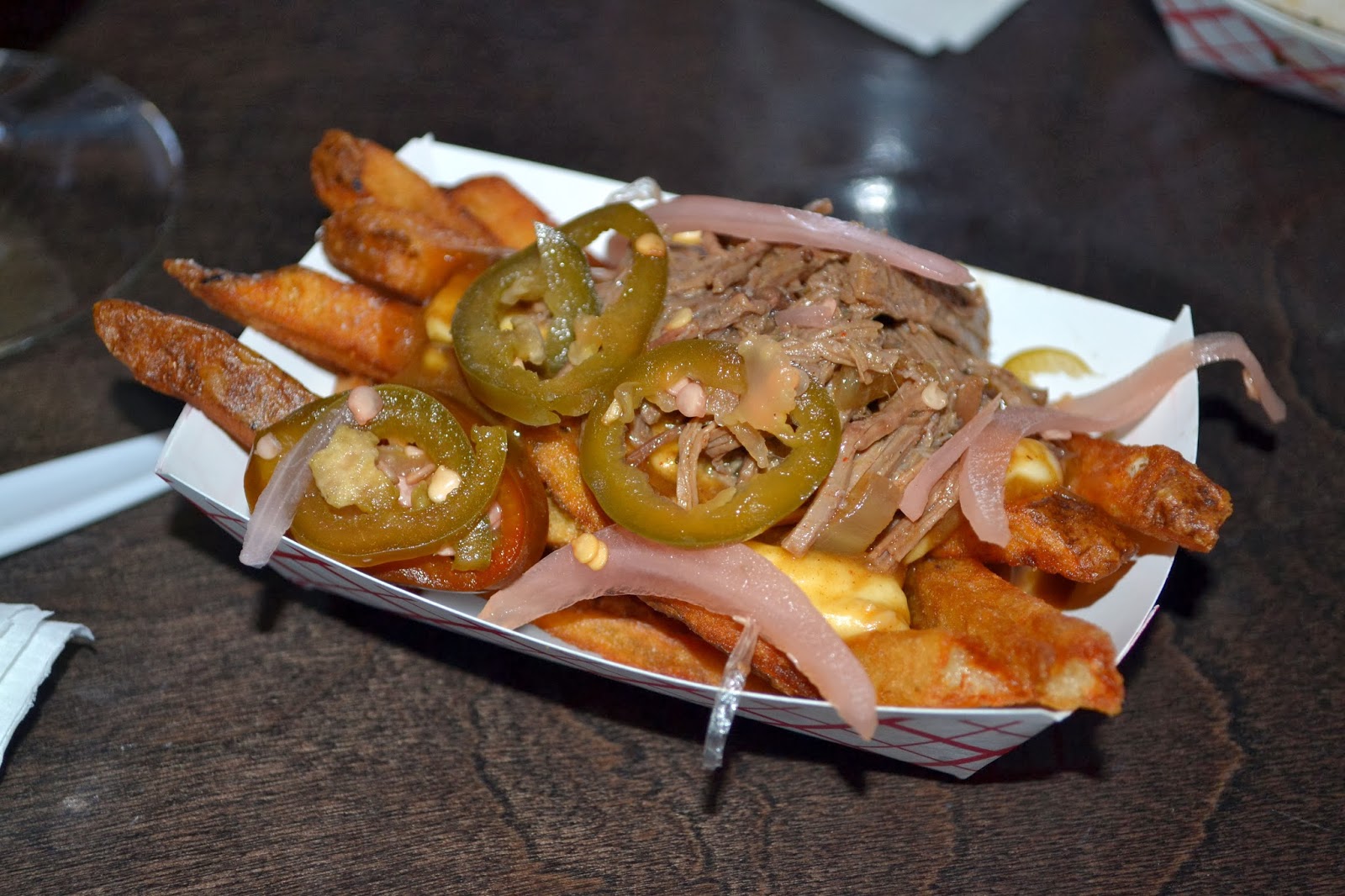 I LOVED the creativity of The Brixton.  This was their version of "breakfast poutine" - complete with biscuits, hot sauce, crispy chicken skin, curds, and white sausage gravy.  RI DIC U LOUS. 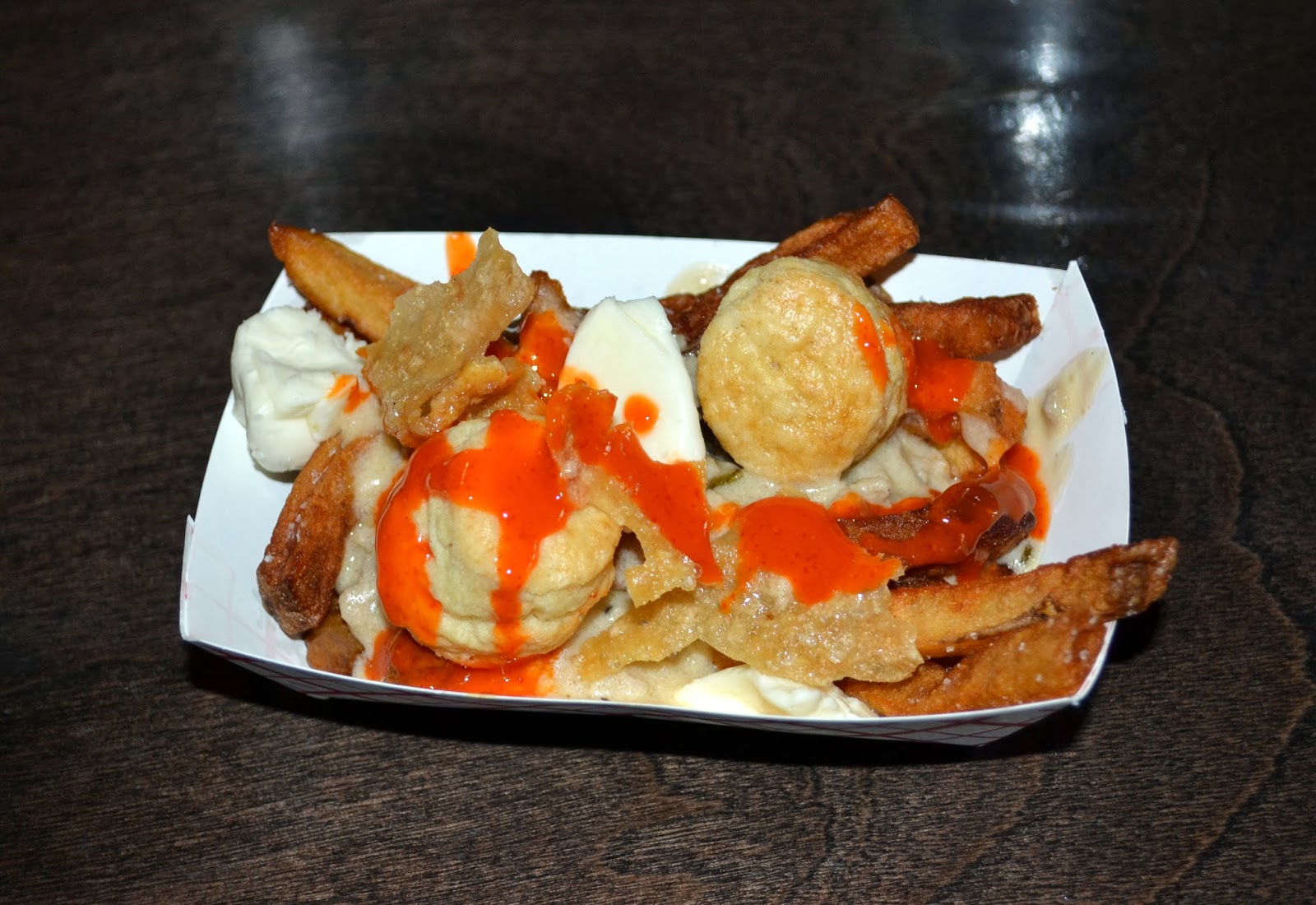 Well I can officially say I've had my fill of poutine...at least until next year.

at 7:00 AM
Email ThisBlogThis!Share to TwitterShare to FacebookShare to Pinterest
Labels: Adventures, Cheese, Gravy, Hungry