Posted by Caitlin
Here's a little disagreement that Jesse and I are having when it comes to decorating the baby's room.  Jesse bought me this paper mache rhino bust from Anthro for my birthday years ago and it used to live above the bedroom door in our Brooklyn apartment.  I knew I wanted to hang it up in a nursery as soon as we had one to decorate.  And now we do.  So I hung it up. 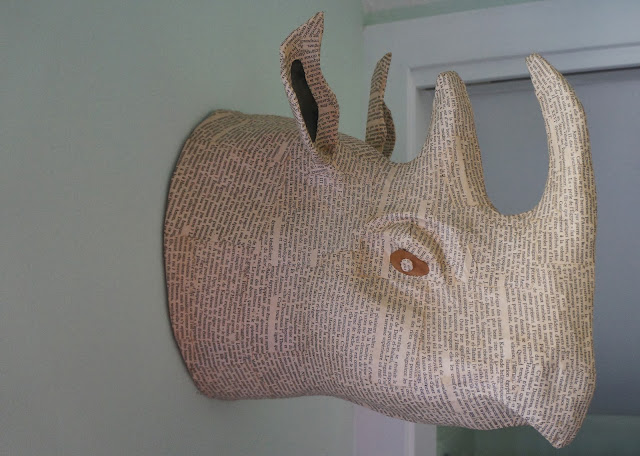 But Jesse HATES that it's in the baby's room.  He thinks that Will is going to have nightmares about the "horned beast" hanging on the wall.  I guess I will concede that he looks a bit grumpy... 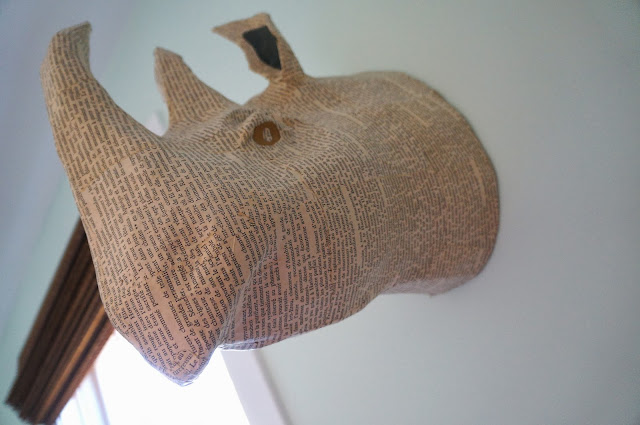 ...but he's made from recycled french books!  He's some nice 3D art for the walls (...not that we've hung much else yet... it's been a busy 7 months...)!  He's a rhino and we got to see real rhinos on our South African safari while I was pregnant with Will!  And it's not like he lives above the crib... he's tucked into a corner near the closet.

So what do you think?  Too creepy?  Should I dress him up with some sort of silly hat to make him a big goofier?  Let us know and stay homey!
Pin It

at 6:32 AM
Email ThisBlogThis!Share to TwitterShare to FacebookShare to Pinterest
Labels: Baby, Homey