Posted by Jaisa
You know how I always talk about how much I dislike baking?  It's because of recipes like this.  There was some serious drama on the high seas with this one.  Between the filling exploding during the pretzel boiling process to mistakenly using WAX PAPER instead of parchment paper...the morale in our kitchen disintegrated quickly.  However, we learned a lot (like to never make these again) and had some delicious scraps treats in the process.  Seriously though, these were really yummy, we just need to not completely screw it up next time.

Based on the thousands of pins in Pinterest, we used Pip & Ebby's recipe.  YUM. 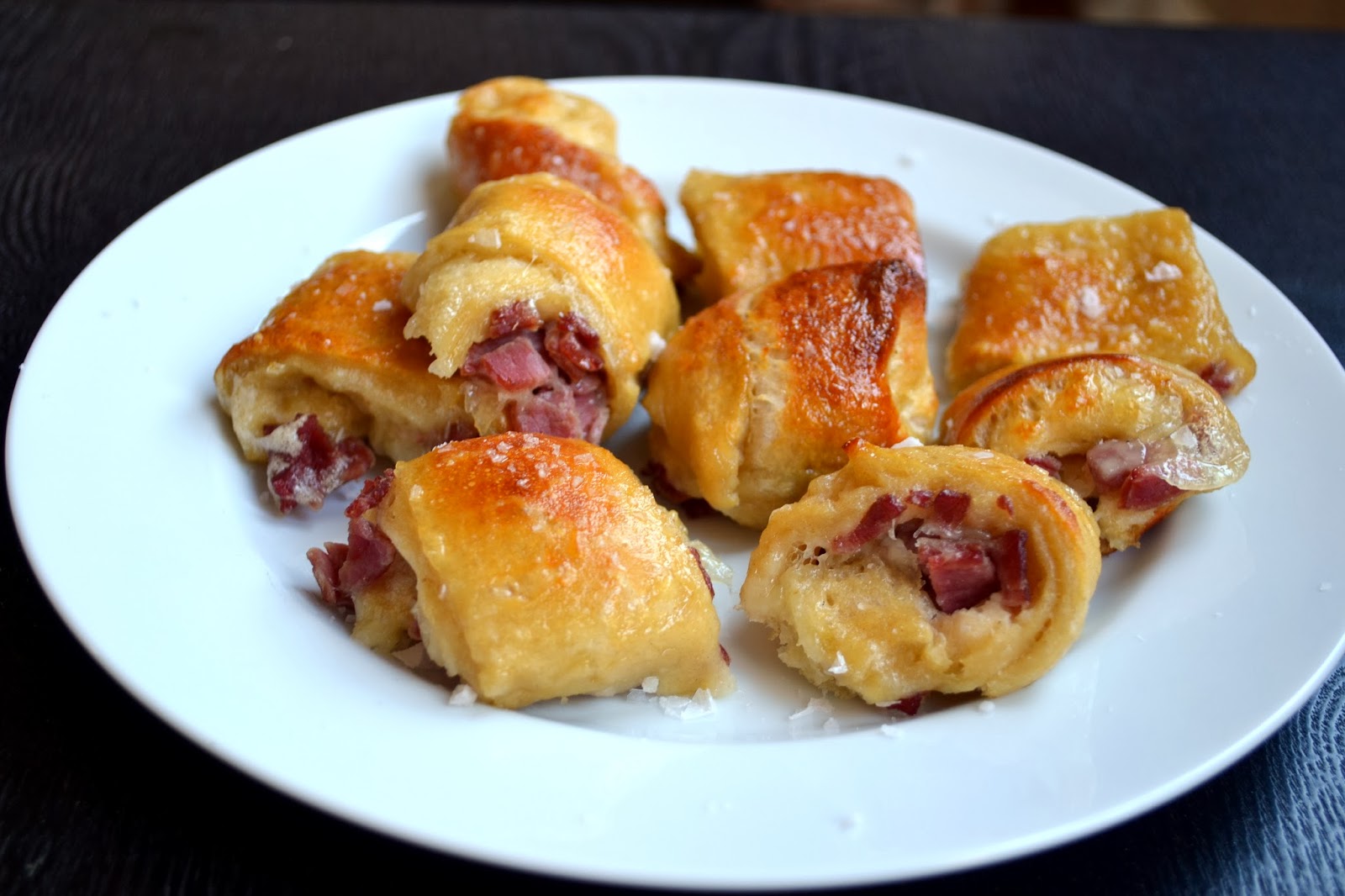 To start, Charlie mixed the brown sugar with the warm milk and whisked it together until the sugar completely dissolved. 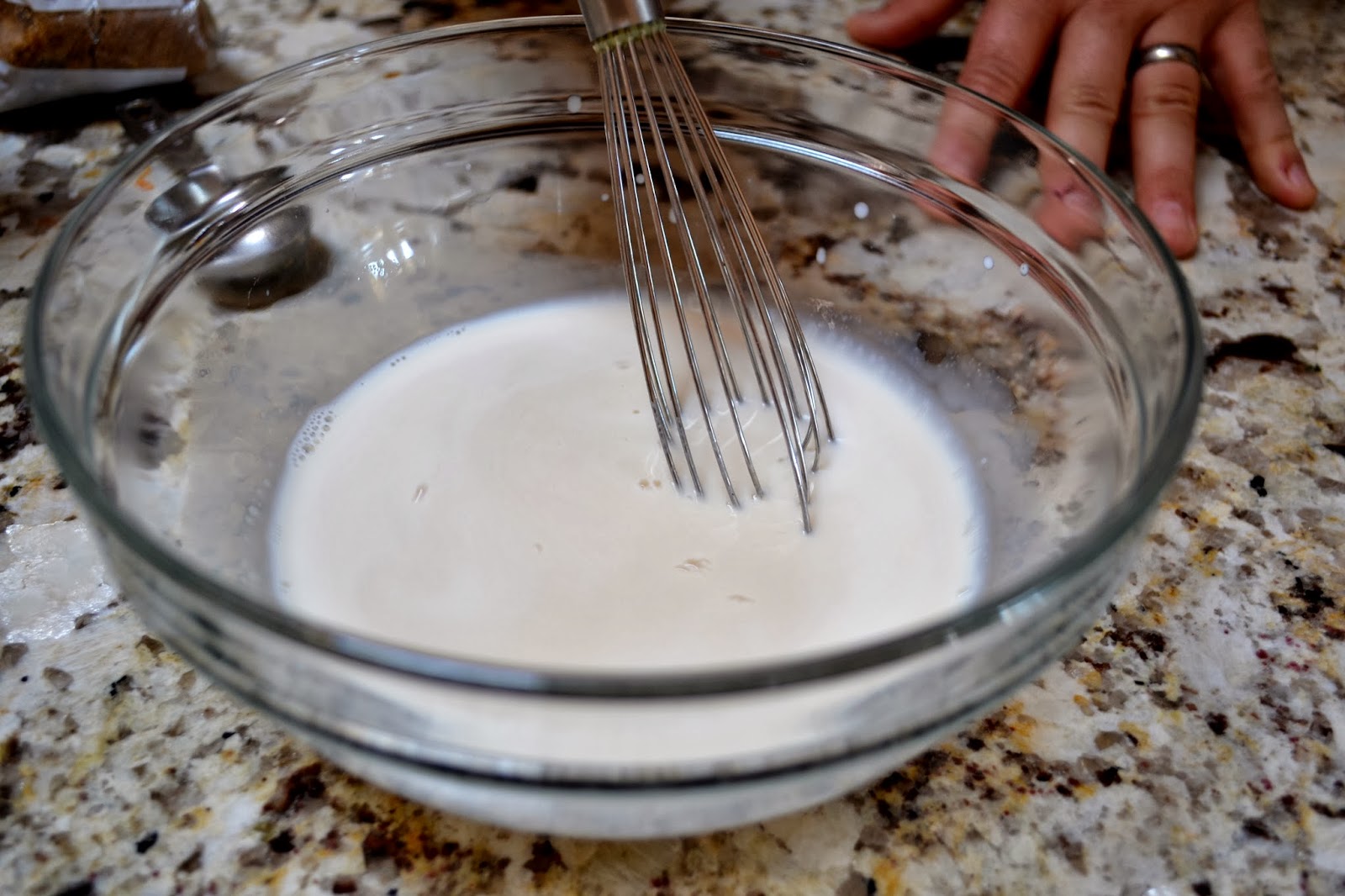 Charlie then added the milk and sugar mixture to the yeast and flour. 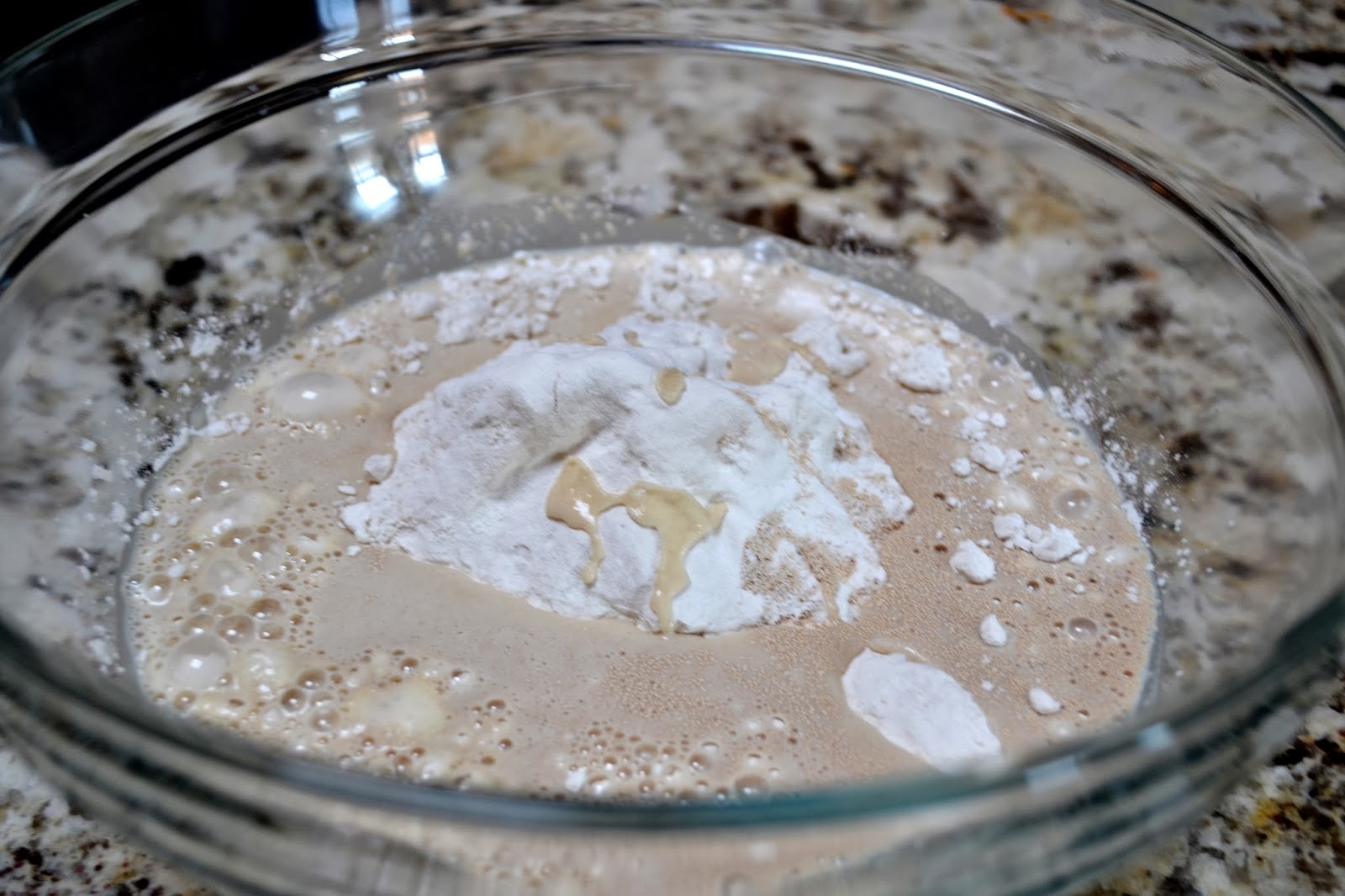 Gently stirring with his fingers, he mixed the ingredients together until it formed a wet dough ball. 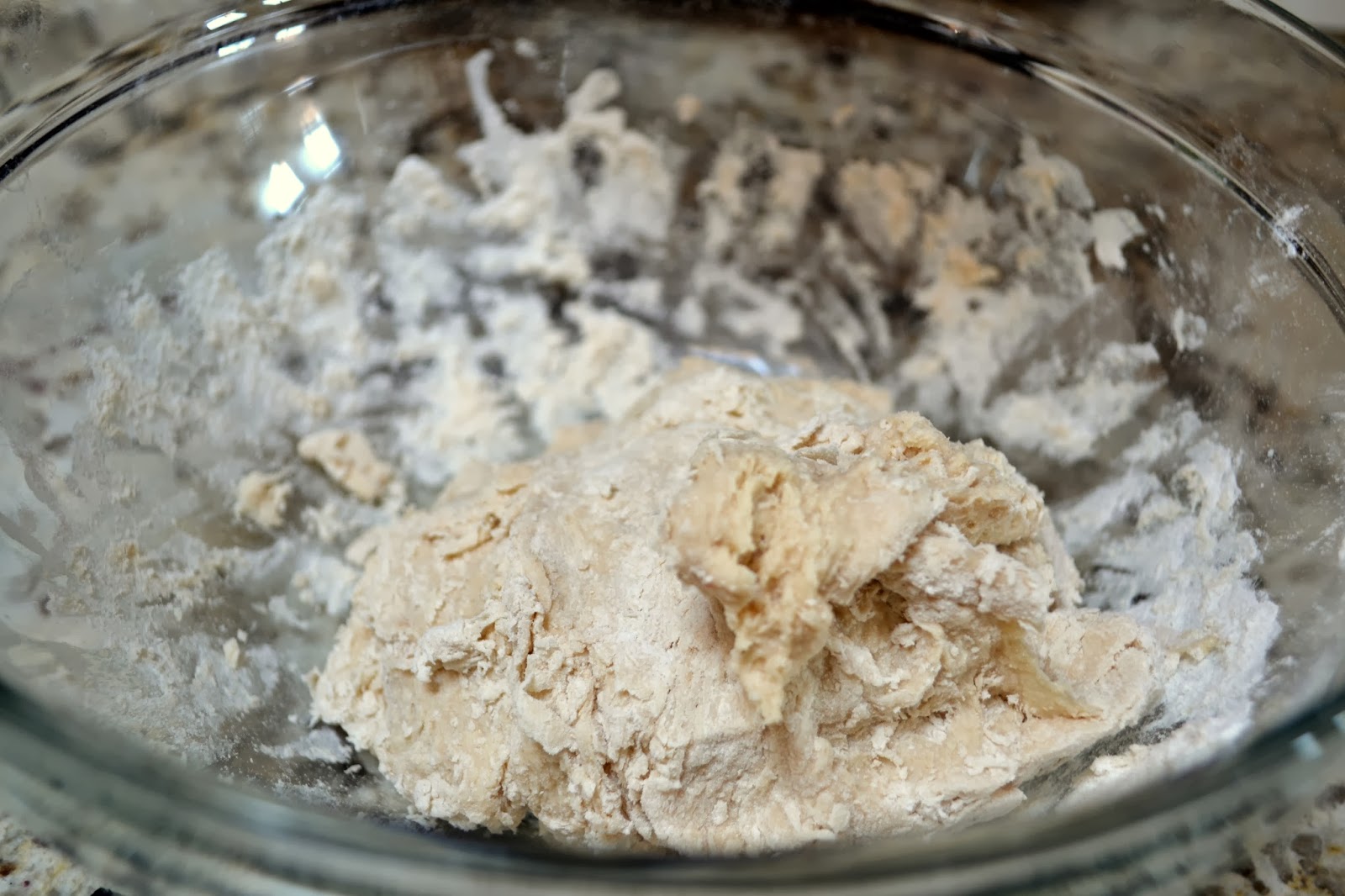 Next, he moved the dough to our kitchen counter which he had cleaned (duh) and then floured. 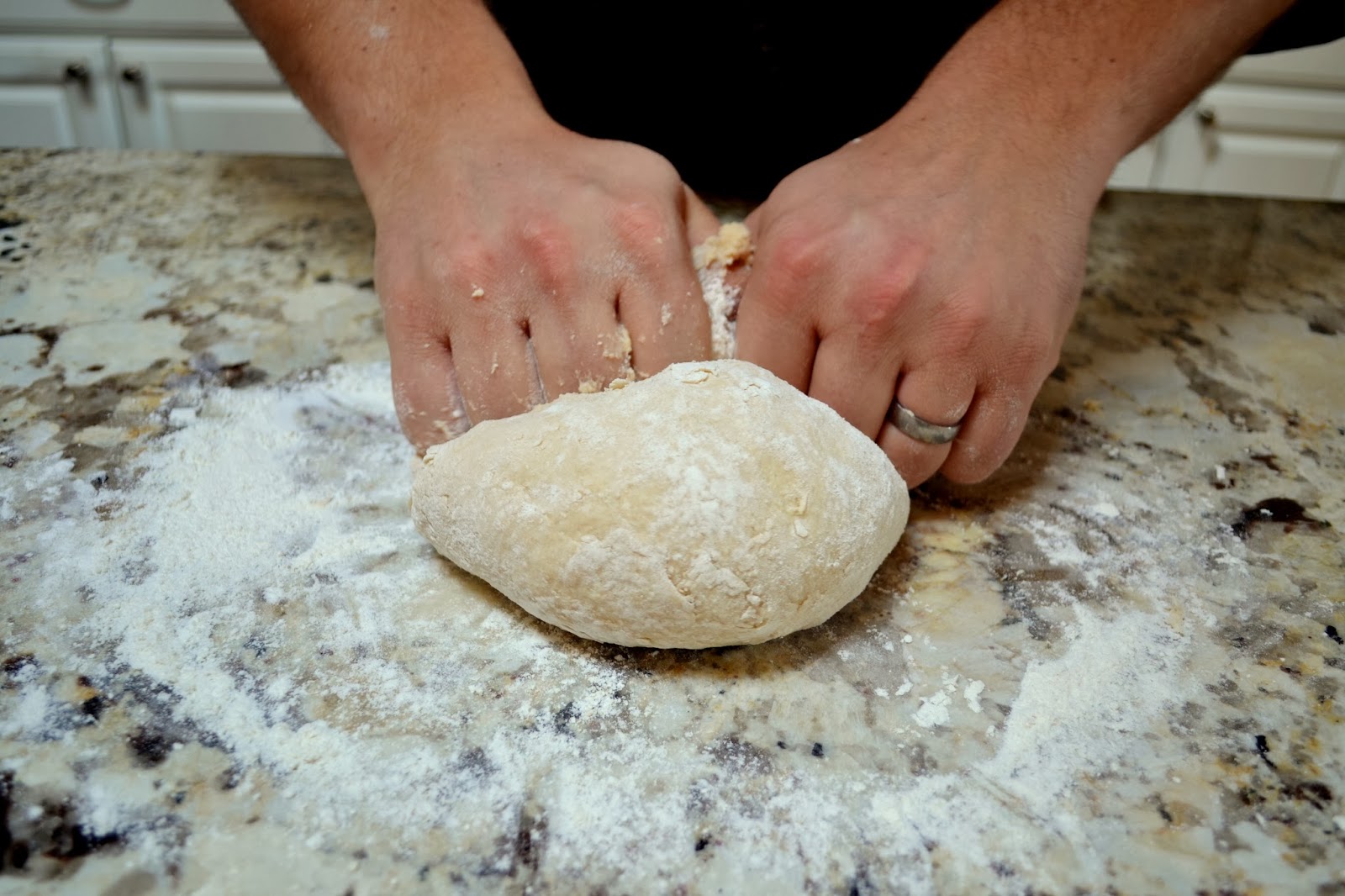 After gently kneading for about two minutes, he greased a bowl with olive oil, added the dough, and then covered the bowl with plastic wrap. 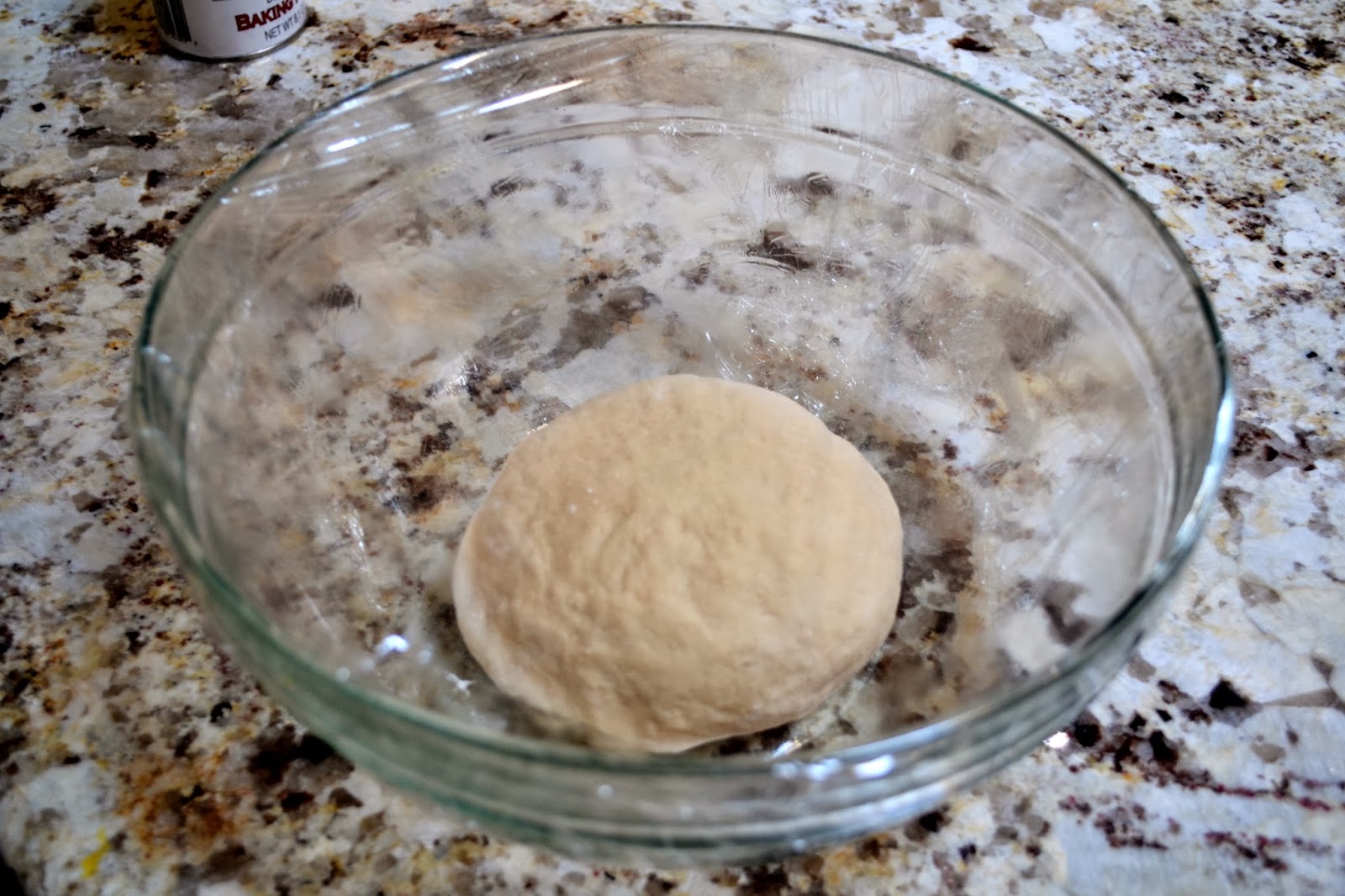 After setting aside for two hours (we put it in the microwave) the dough doubled in size. 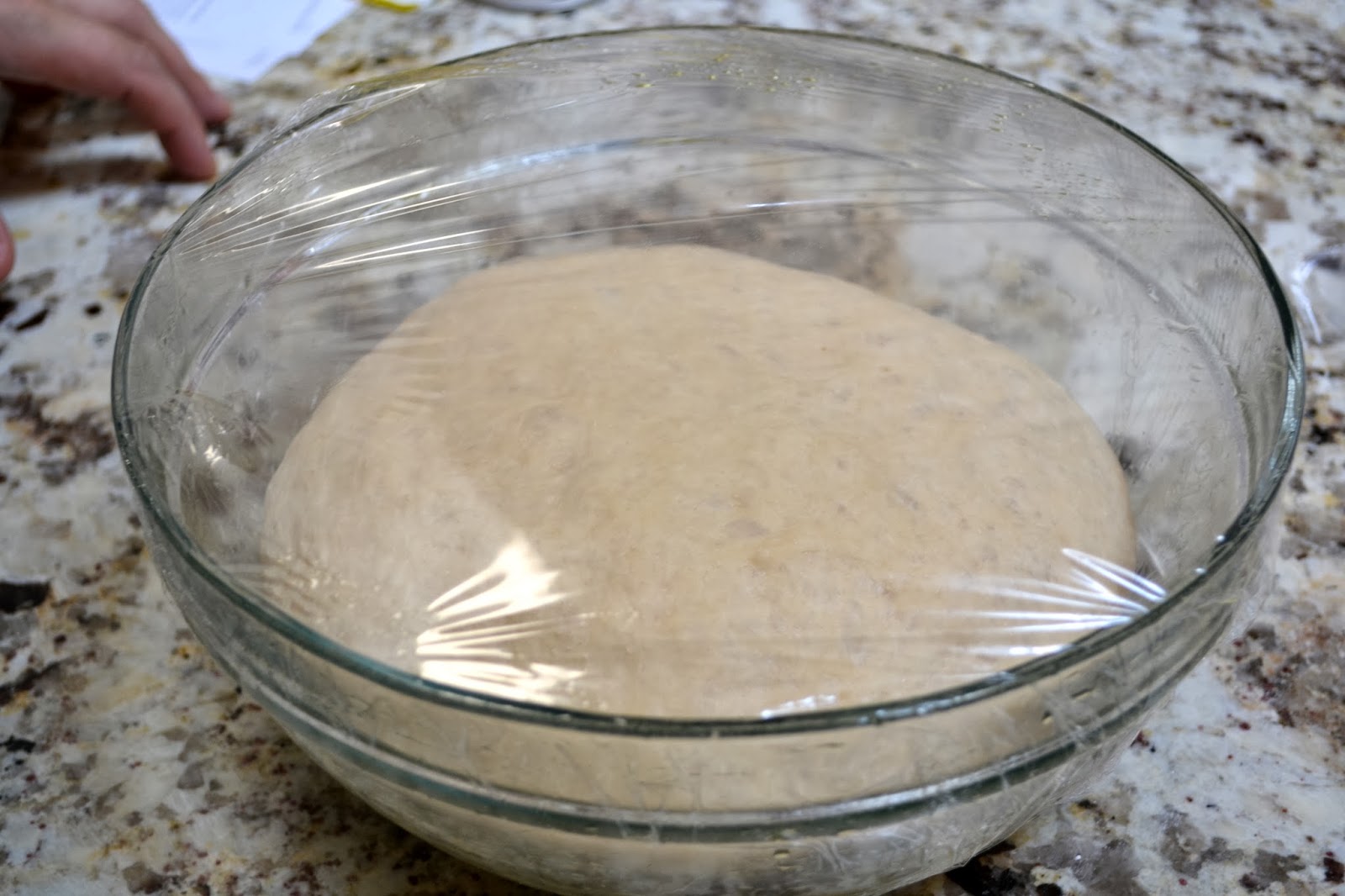 While he was tending to the dough, I started on the filling.  I chopped up some sliced corned beef that I just got from the deli counter. 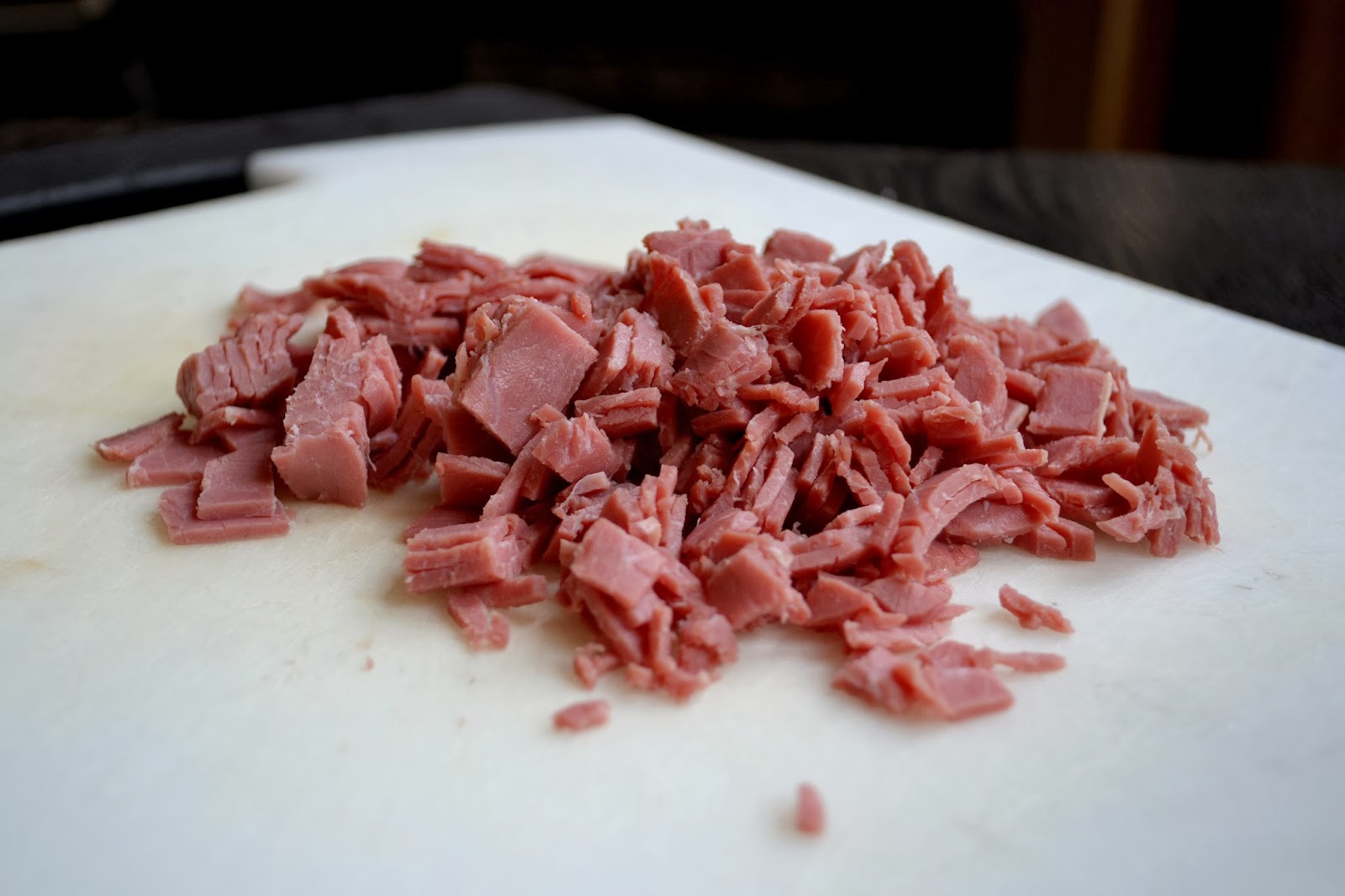 Meanwhile, Charlie separated the dough into four equal parts and then rolled them out into long rectangles. 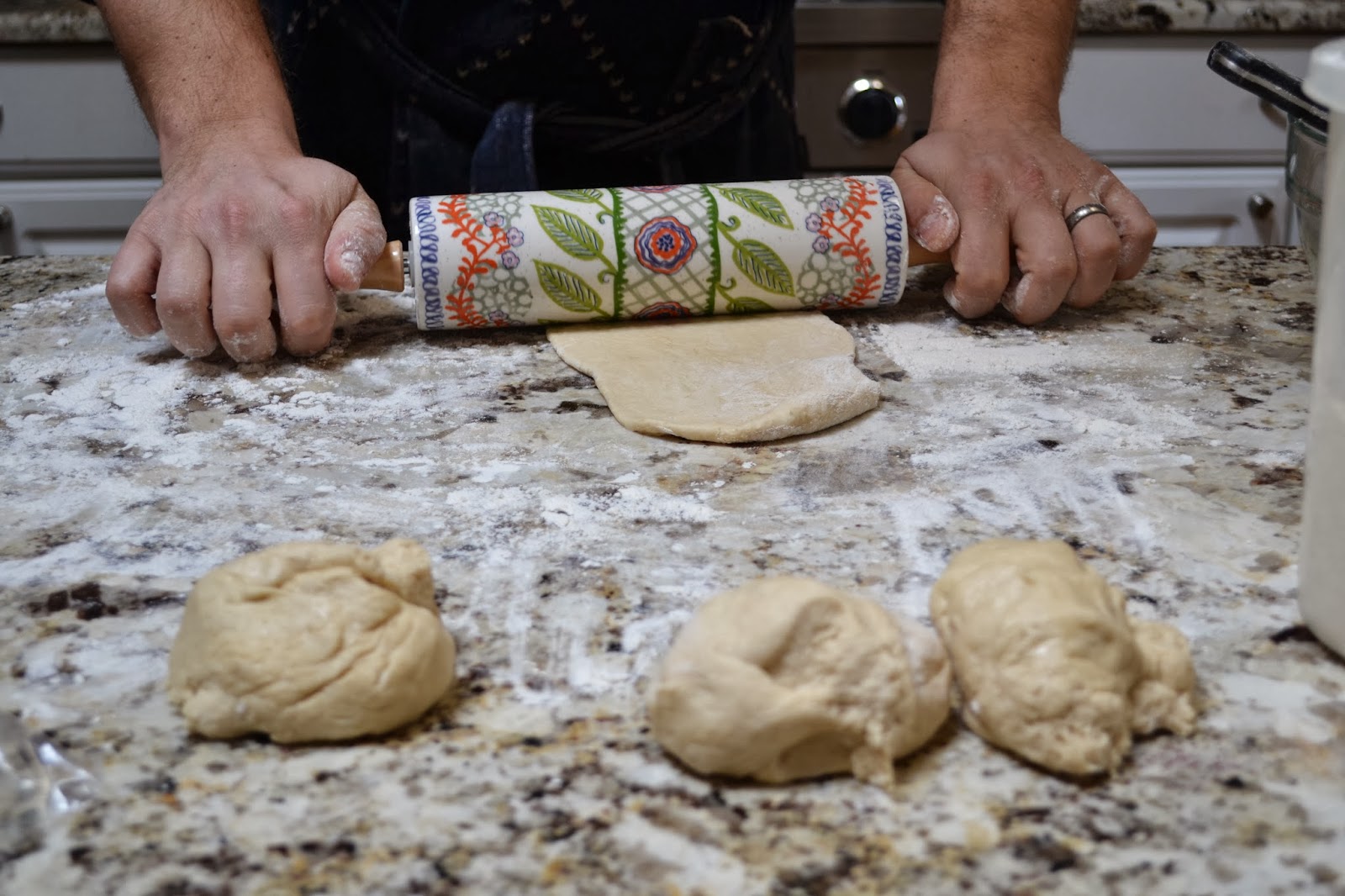 We then filled the dough with corned beef, Swiss cheese, and Monterrey jack cheese. 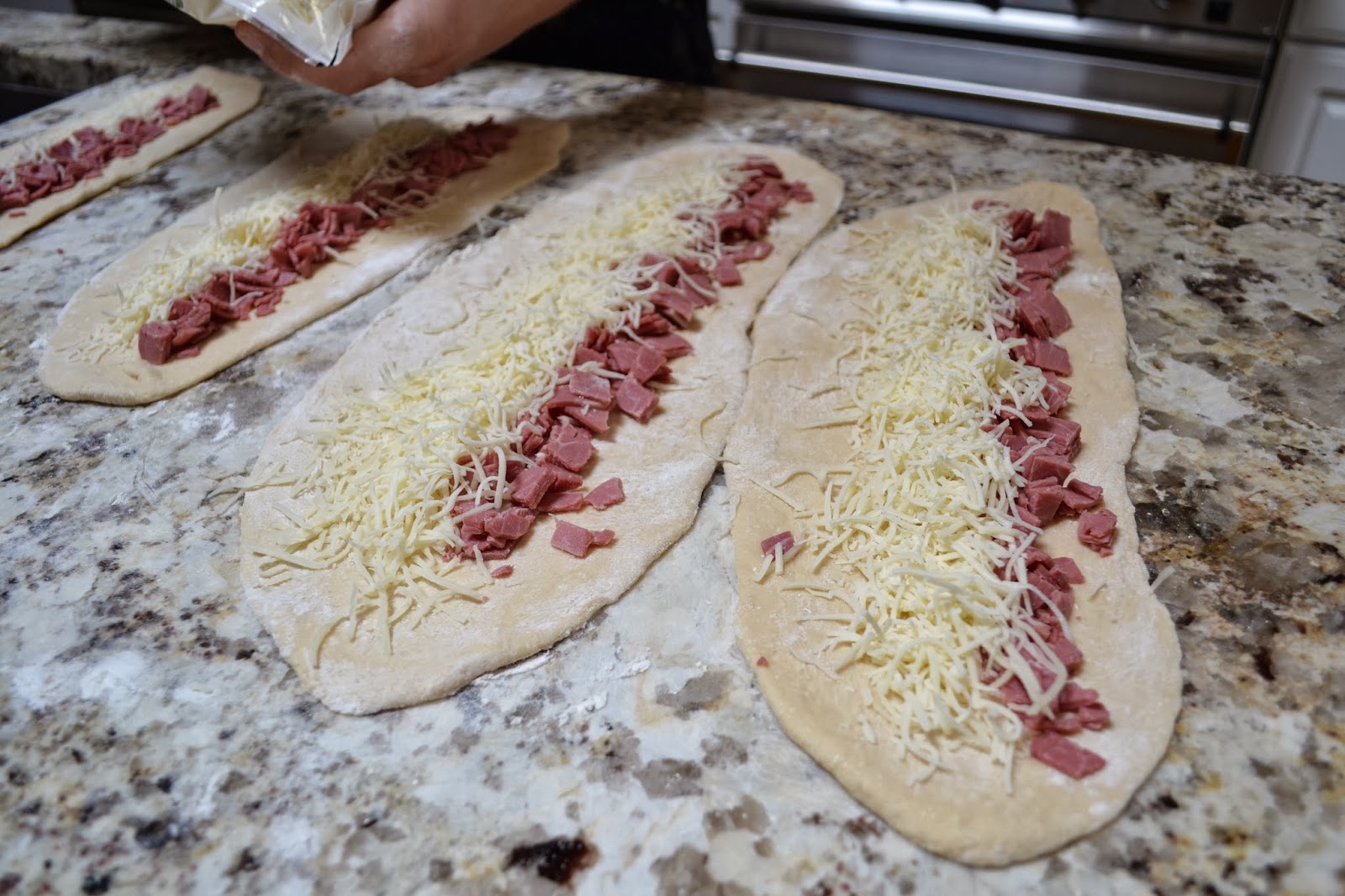 Ok, we then rolled up the dough as tightly as we could. Ta daaaa.  Yeah, not so fast.  This is when things started to spin out. 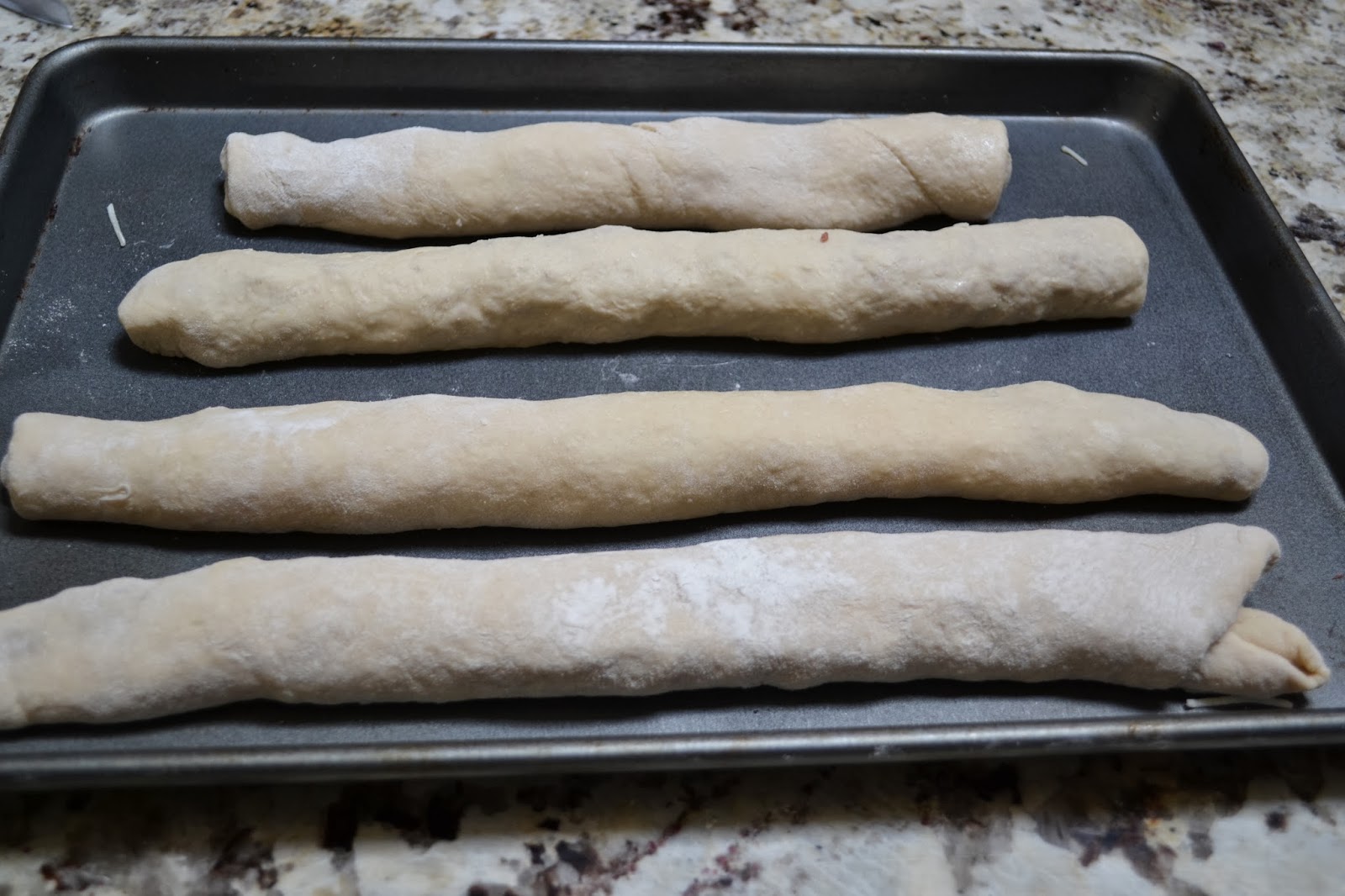 After slicing, we then boiled the pretzels in water that we had added baking powder to.  We boiled for about 20 seconds and turned as gently as possible.  A lot of the filling fell out, I'm not going to lie. 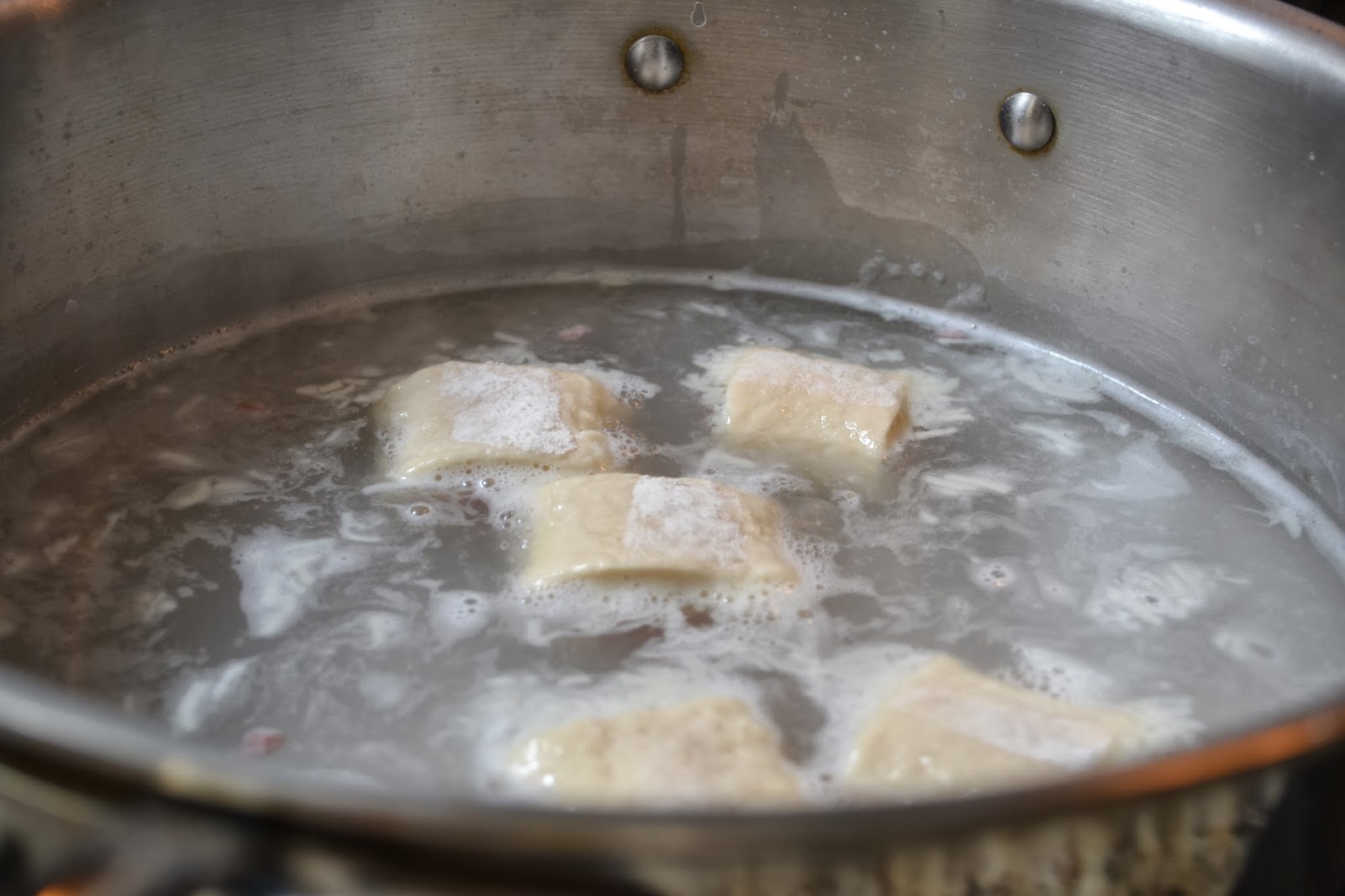 This is what they look like before going into the oven.  Sort of floppy, soggy, and sad.  Don't worry!  They will get nice and golden in the oven. 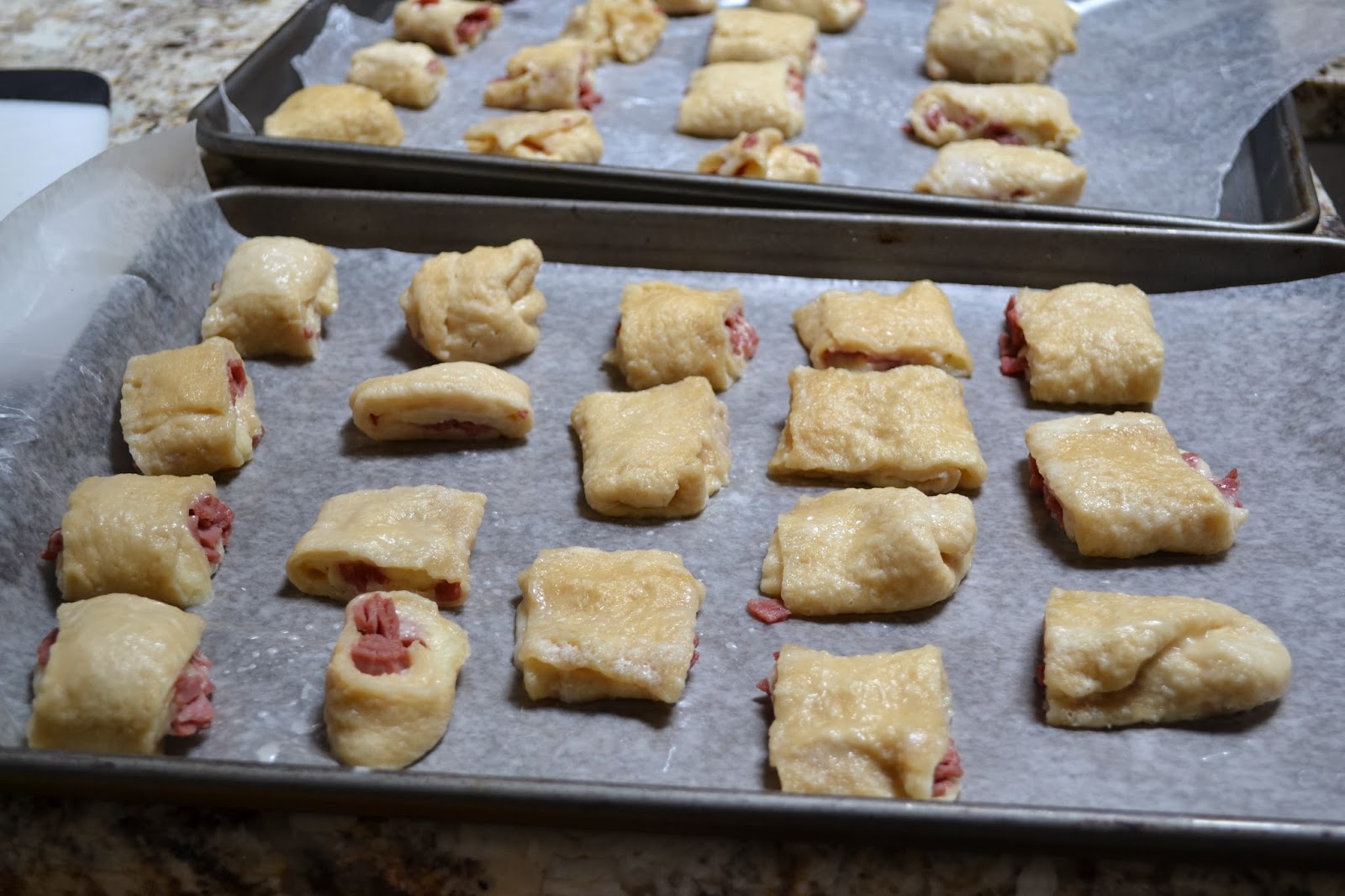 So, after you bake for about 15-20 minutes in a 400 degree oven, the pretzels will become nice and golden brown.  Once you remove from the oven, brush with butter and sprinkle with some coarse chunky kosher or sea salt. 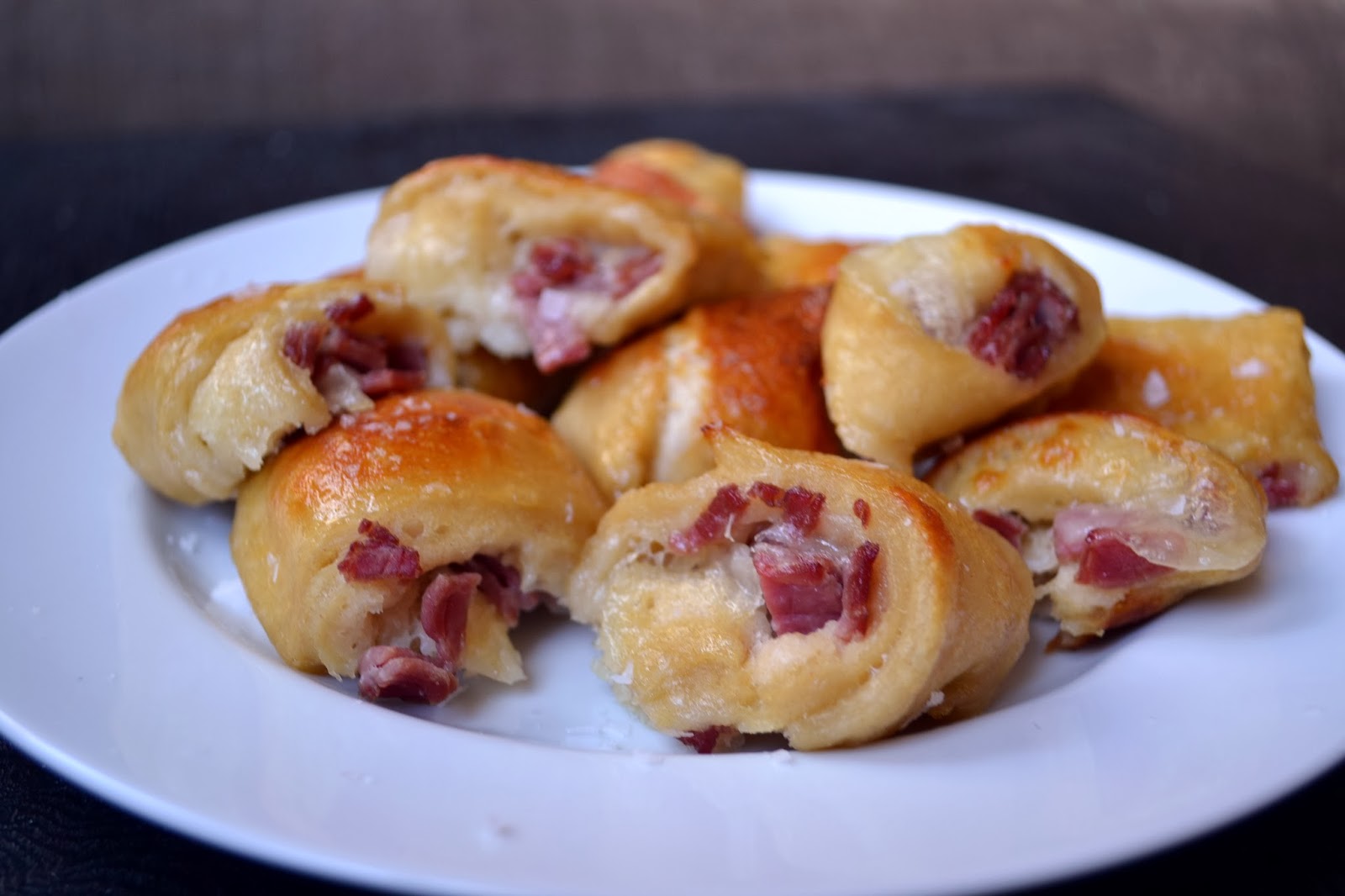 I know these look good and all, but if you flipped them over you would see the absolute TRAUMA these went through as I tried to pick off every small piece of wax paper.  What a DEE SAS TER.  Regardless, we are going to try this again because this really is a fantastic recipe...it's just the chef/baker that need some work.

at 10:34 PM
Email ThisBlogThis!Share to TwitterShare to FacebookShare to Pinterest