Posted by Jaisa
Hola.  I'm writing this while in Spain right now...so I'm a bit distracted but I'll try to keep it together. 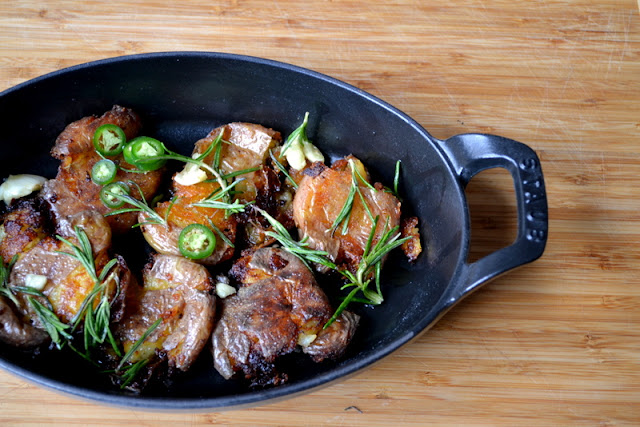 Ok for reals...I made these potatoes before we left and the were incredible.  They were crispy, garlicky, rosemary-y, a bit spicy, and pillowy soft in the middle.  Yum.

The inspiration for this recipe is pretty random.  One of my go to restaurants in Chicago, Quartino, has this white bean spread with rosemary, olive oil, and serrano chilies.  It's the best.  Somehow my weird little brain decided to use these flavors with potatoes.  Success. 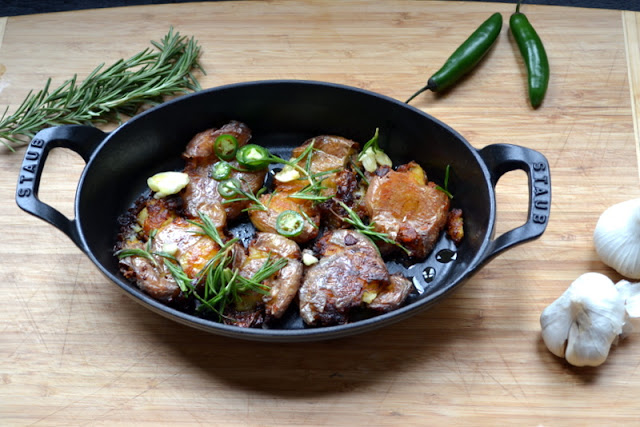 There aren't exact measurements for a rustic dish like this.  So don't stress.  You will, however, need the following ingredients:

Start by thinly slicing one to two serrano chillies, roughly chopping a sprig or two of rosemary, and then adding a few large cloves of garlic that have been smashed.  I usually just use the side of my knife to bruise the skin, releasing all of the yummy garlicky goodness.  Finally, drizzle some good olive oil on top to make a "dressing" of sorts.  The oil is just a vehicle to get all of the flavors together and happy.  We're not actually going to dress the potatoes with all of this. 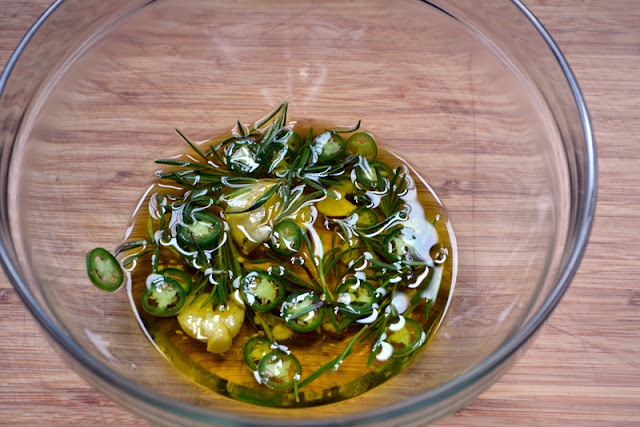 I use baby Yukon gold potatoes for a couple of reasons.  Yukon gold are just creamy and wonderful all by themselves.  They don't dry out like other potatoes (I won't mention names).  Anyway, boil your po-ta-toes for 10-12 minutes or until they are soft when pierced with a fork. 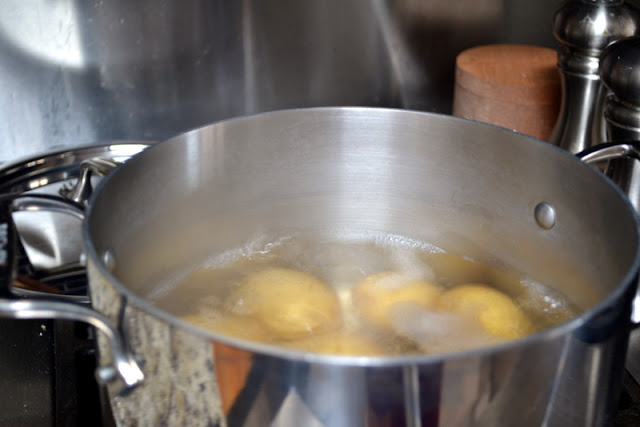 Ok...now comes the fun part.  These are called smashed potatoes so that's just what we want to do.  Wait until the potatoes cool enough to touch, and smash them down with a plate, or the bottom of a large glass like below: 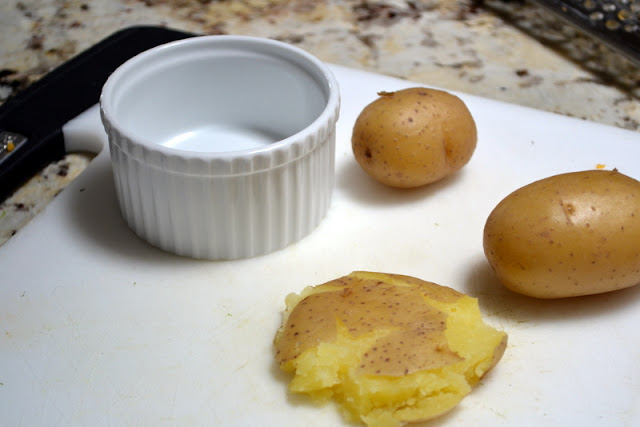 This is what you'll end up with.  You don't want to smash them all the way down...just enough to level them out.  Don't freak if a couple fall apart.  Those are bonus ones the chef gets. 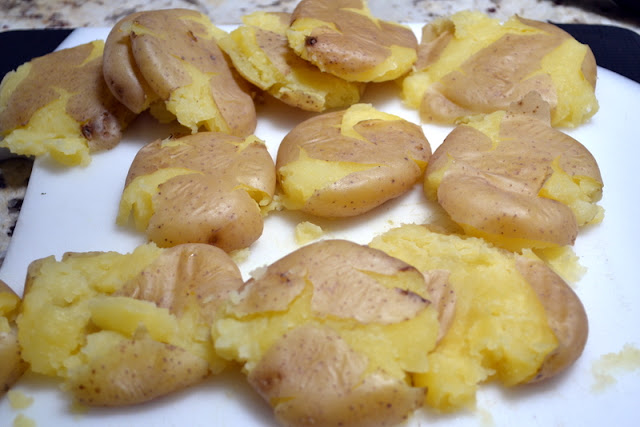 Fill a pan (preferably non stick) with about 1/2 an inch of canola oil and let it heat up over medium heat for about 4-5 minutes.  Any light oil will do - since we're frying we don't want to use a heavy oil like olive oil.  Trust. 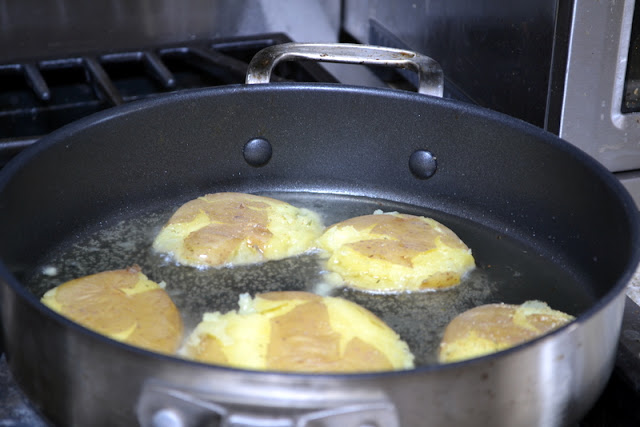 Let these do their thing.  You really can't mess with these or they are going to break apart and you're going to send me emails like, OMG Jaisa why would you suggest a recipe that makes me want to throw my entire kitchen out the window?  Just let them sit and fry for about 5-8 minutes on the first side, or until you see golden brown edges forming on the outside.  The second side won't take as long - maybe 2-3 minutes or so. 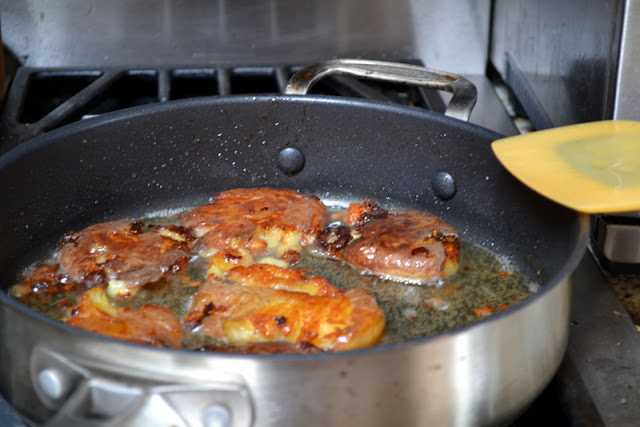 Once crispified, take them out and sprinkle with a little bit of garlic salt.  Or garlic powder and salt. Let these drain on paper towels to soak up the excess oil.  Next, gently lay the potatoes in whatever dish you are serving these in, and then scoop out the rosemary, chillies, and garlic that have been resting in the olive oil.  If a little olive oil comes with the herbs and chillies, don't worry.  It's delicious. 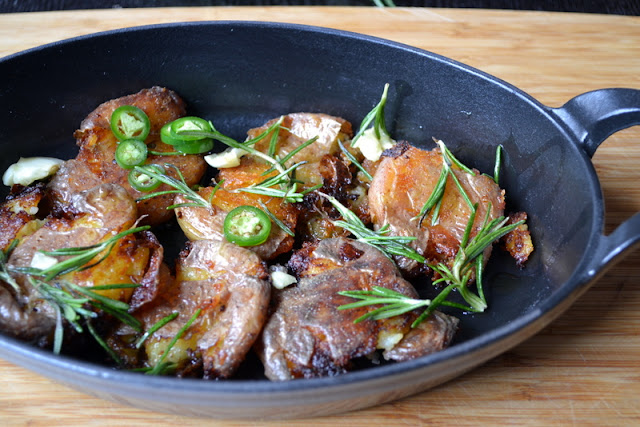 Look at all of those golden brown and crunchy edges....DAMN. 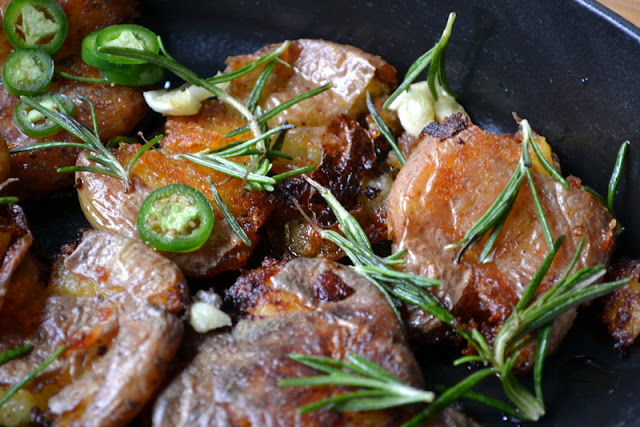 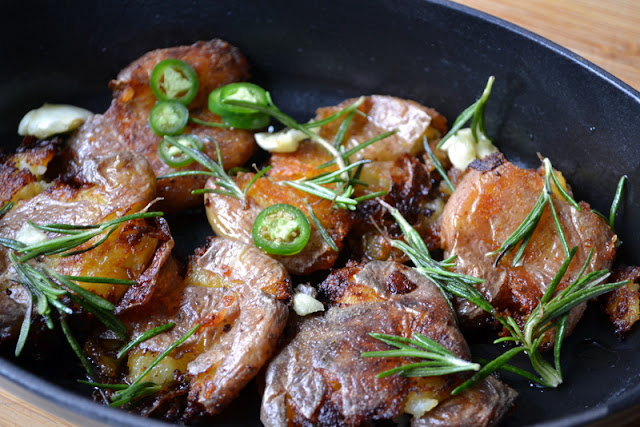 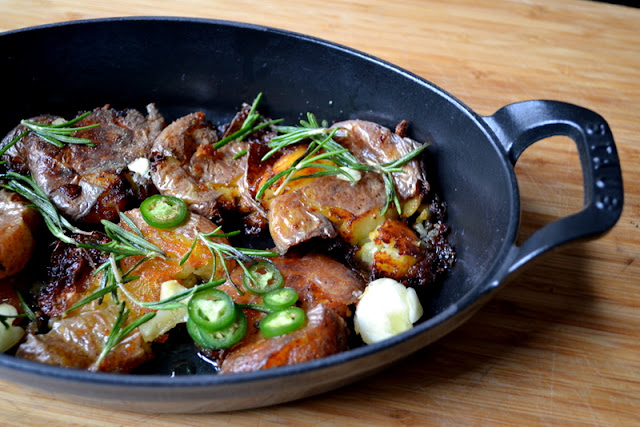 at 5:22 AM
Email ThisBlogThis!Share to TwitterShare to FacebookShare to Pinterest
Labels: Hungry, Potatoes, Side Dish, Vegetarian