Posted by Jaisa
So I didn't really know what I was doing here, shock of all shocks.  I had never made a sweet potato casserole, I've only had my moms and know what it should look and taste like.  I sort of learned while I went, hence, no ingredients shot. I also didn't look up any recipe for guidance, oops.  Lucky for you, I figured it out and it came out delicious! 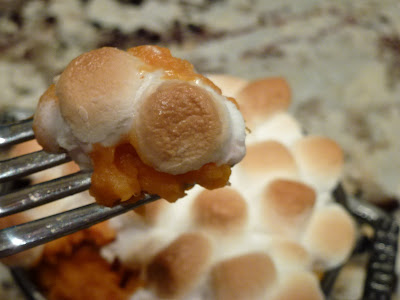 My husband's friend Rick and his lovely wife, Jenny, came over to drop off their amazing German Shepherd, Ralph, for the weekend (dog sitting adventure post to follow!).  Rick saw the potatoes and marshmallows on the counter and couldn't possibly figure out what I was making.  I think I scared him a little bit.  I should mention he is also from Ireland.  Hopefully this post will restore his faith in American cooking. 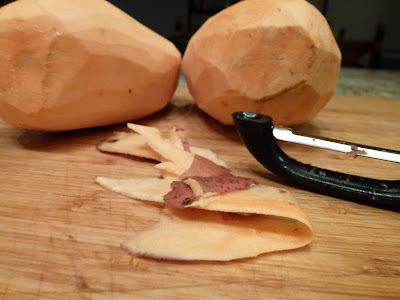 I started by peeling two large sweet potatoes.  This made 3 hefty servings. 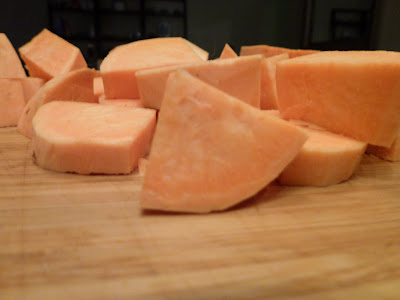 Chop them up so they will cook faster.  The faster it cooks the faster it's joyfully burning my mouth.  I basically made 5 large slices and quartered it from there. 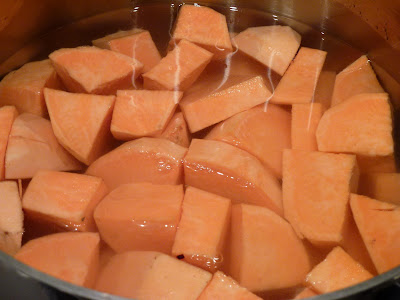 Throw them in a pan and cover with water.  Bring to a boil and let cook for 10-15 minutes or until fork tender. 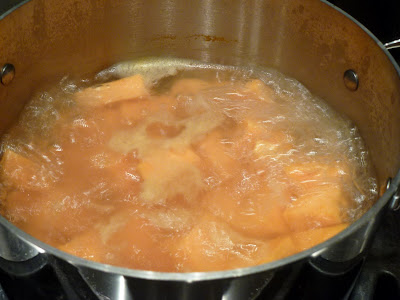 I had mine at a roaring boil.  I just used enough water to cover it, so this should work fine and not boil over for you. 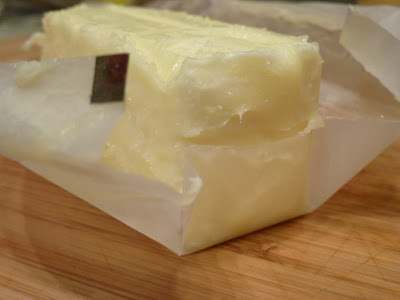 Hello, friend.  I've missed you. Oh?  What's that?  It's only been twenty minutes?  Does our love mean nothing to you? 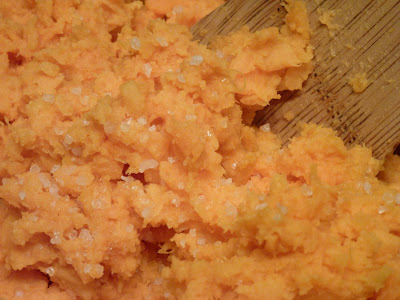 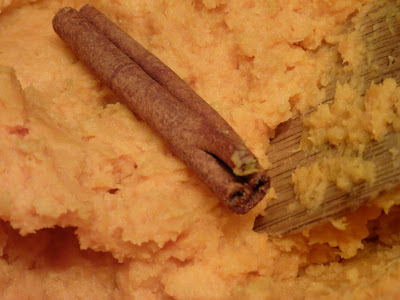 Now, I only like a HINT of cinnamon.  Cinnamon and I have a love-hate relationship.  I almost barely like it.  But when it's barely there, I love it.  If you haven't noticed, I only make sense half the time.

Anyway, I threw a stick of cinnamon in at the end, after it had been mashed, and stirred it around.  This is still a savory dish as far as I'm concerned, so I don't want it tasting like an apple pie.  If you wanted a stronger cinnamon flavor, prehaps you could put the cinnamon stick in as the potatoes are boiling?  Huh.  That's an interesting thought. 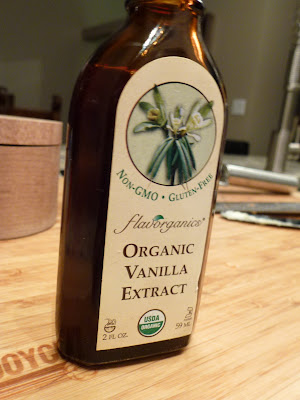 I can't believe I still have this vanilla.  After we moved into our condo over two years ago, my friend Lauren and I decided we wanted to bake chocolate chip cookies.  Well, we had no vanilla.  Oh, I know!  Let's bang on our neighbors door at 10pm on a Sunday.  Luckily for us, they were so lovely and welcoming and even gave us this vanilla as a house warming gift.  So neighborly. 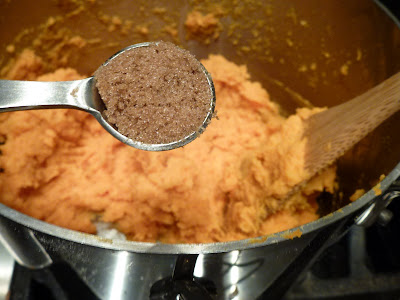 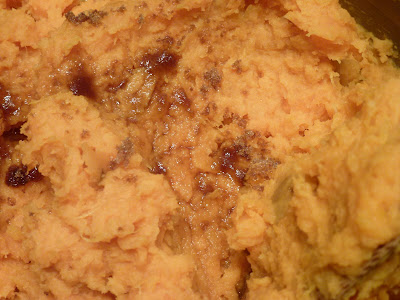 Now, mix in your vanilla and brown sugar and taste.  What does it need?  A little more salt?  A little more vanilla?  I don't like this overly sweet - I want the savoriness from the sea salt and the potatoes to shine, with just a hint of sweetness in the background.  If you have a sweet tooth, just add a bit more sugar. 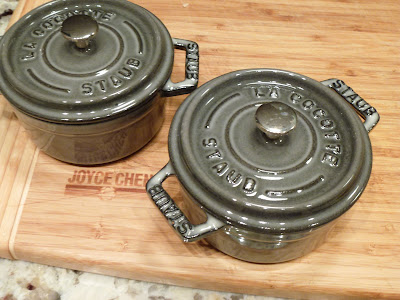 YES!  An excuse to use my super sweet Staub mini ramekins.
﻿ 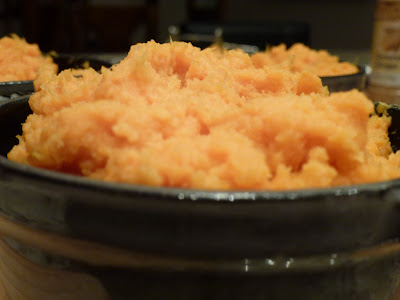 ﻿ Add the potatoes to the ramekins and pile high, but leaving room for the marshmallows to be added. 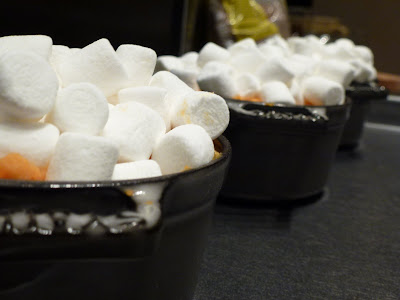 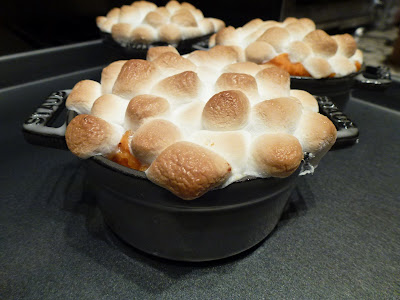 WOWZA.  Don't these look beautiful!  I baked them in a 400 degree oven for 5-7 minutes until the top was just golden brown.  Watch these like a hawk.  Burnt marshmallows are a mess. 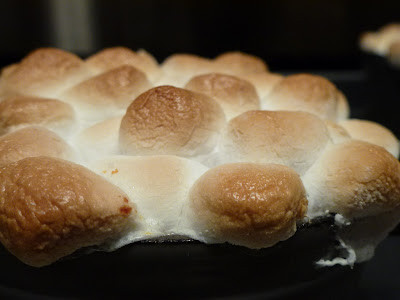 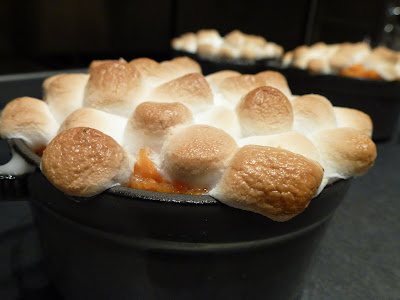 Just one more picture!  Just one more!  Oh I just love how these came out.  I think the individual servings are so rustic and beautiful.  How do you like to make your sweet potatoes on Thanksgiving?  As always, keep reading and stay hungry!

Peel, and chop sweet potatoes.  Boil in water for 10-15 minutes or until fork tender.  Drain.  Add them back into the pan and mash.  Add cinnamon stick, unsalted butter and sea salt and stir.  Add brown sugar and vanilla.  Taste and adjust accordingly.  In individual ramekins, add potatoes and top with mini marshmallows.  Bake in 400 degree oven until topping is golden brown, about 5-7 minutes.  Serve hot and enjoy!
Pin It

at 11:30 AM
Email ThisBlogThis!Share to TwitterShare to FacebookShare to Pinterest
Labels: Hungry, Potatoes, Side Dish, Thanksgiving