Posted by Jaisa
This is a dish that is very near and dear to my husband's heart.  It's his favorite meal that his Mom makes, and he just loves it.   My husband glows when he talks about this dish.  Eating this means he's home.  It means he's hovering around the kitchen with his Dad and brother going to town on one of their favorite meals.  I like to witness this feeding from afar so I can steer clear and not lose a limb.  It's dangerous out there in the wild land of Minnesota. 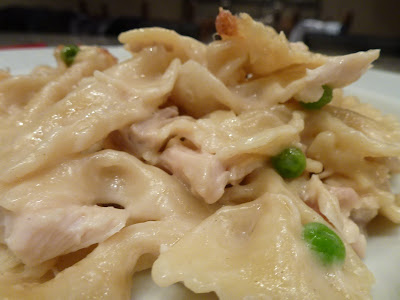 I've never tried to make this before just because I feel like you shouldn't mess with a perfect culinary memory, but I thought this year I'd reach out to Mom II (my mother in law) and see what this is all about.  It's such a great recipe for your left over turkey, I just had to share. 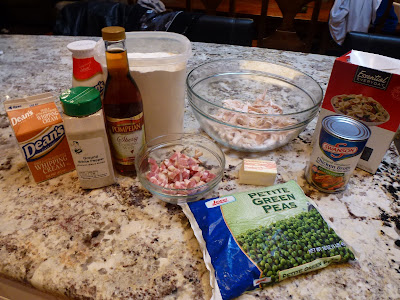 I have to add a major disclaimer here that I switched up a few things.  I didn't have mushrooms on hand or spaghetti.  So I put in peas and used bow tie pasta instead.   I added pancetta because it would have gone to waste otherwise.  Since I added the pancetta, I did half milk and half cream since we were getting some extra fat from the rendered pancetta.

Here are the ingredients that I used: 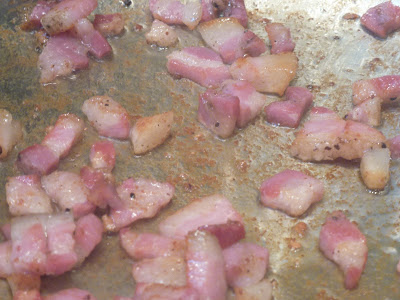 Start building your flavors by adding the chopped pancetta to a sautee pan.  Use a big enough pan so you can mix everything together later.  You can find pancetta at most super market deli counters.  I just order mine cut thick so half the chopping is already done.  If you don't have pancetta no bigs.  You can easily use bacon.  Just throw in some black pepper and some garlic powder while the bacon is cooking to compensate for the seasoning you'd be missing from the pancetta. 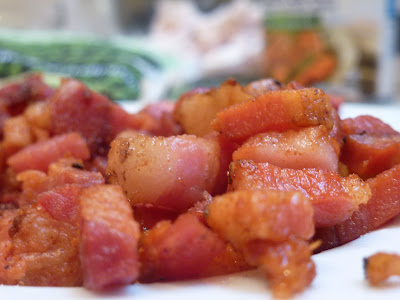 It's embarrassing how much of this I ate while I was cooking the rest of the dish.  They were like little savory Chiclets!  I am weak. 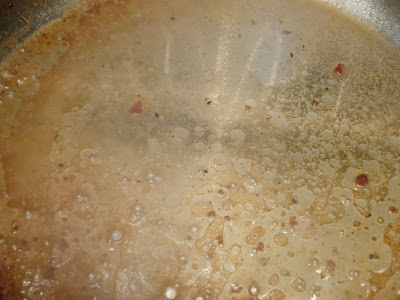 To pick up all of the crispy brown pancetta bits off the bottom, deglaze your pan with a touch of sherry.  I have never cooked with sherry and I gotta tell you, I liked it.  I like it a lot. 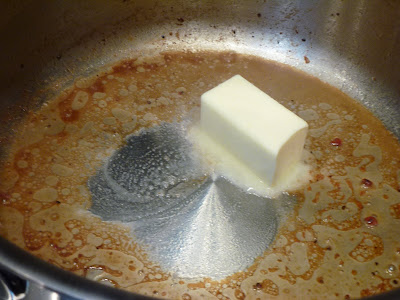 Throw in your butter to the lovely flavor we just picked up off the pan to make your rue. 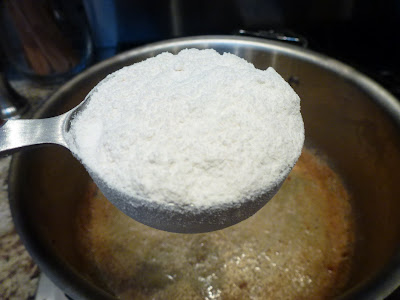 Add an equal amount of flour. 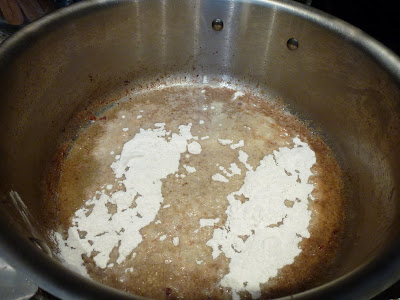 Sprinkle evenly and then whisk away. 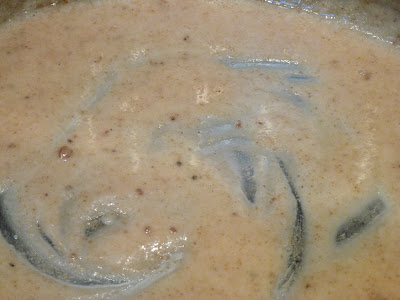 Once it gets thick and bubbly it's time to add our other ingredients to make our sauce. 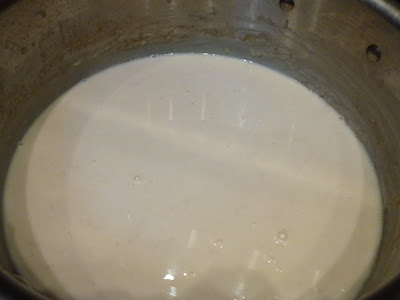 Throw in your milk, cream, and chicken stock. 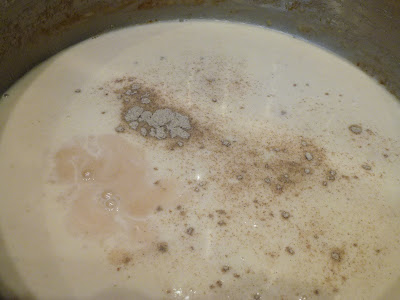 Once it's blended well and starts to thicken, add the rest of the sherry and the white pepper. 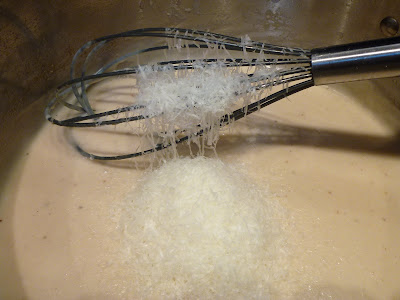 I whisked in about 1/2 cup of freshly grated Parmesan. I think next time I'll do a bit more. 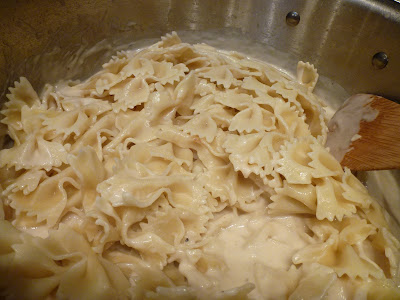 Add whatever pasta you want.  Just cook it in well salted water and lean towards extra al dente.  Since it's spending some extra cooking time in the oven later, you want the pasta to still have a nice bite.  I love bow ties (aka farfalle if you are a pasta snob), especially in a cream sauce like this.  The pasta has lots of nooks and crannies so the yummy cream sauce gets trapped inside for your eating pleasure. 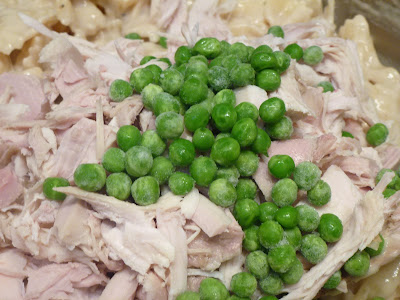 Add your shredded turkey and peas.

So this is one of those times where I hate admitting that my mom is right about something, but she was.  I went and grabbed frozen peas when we were grocery shopping about a year ago and she sent me back because they weren't "petite" green peas.  Ugh, eye roll, what's the difference?  Well, actually, there is a huge difference.  Petite green peas are smaller and crunchier and pop in your mouth releasing this delicious sweet flavor.  There is nothing worse than a mushy pea.  Trust me (and my mom) there is a difference.  I put green peas in everything, but especially in a cream sauces like this.  FYI - This is where the original recipe called for cooked mushrooms. 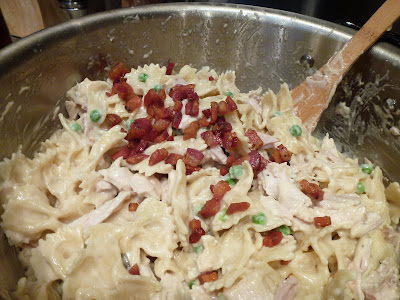 Stir everything together and add the pancetta.  I should have zoomed in here so you couldn't see just how much of the pancetta I ate.  Dang it! 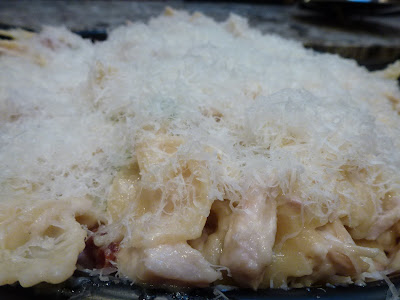 Pour everything into a casserole dish and top with freshly grated parm.  Place in a pre heated 375 degree oven for about 30 minutes or until the cheese gets nice and golden brown.  Everything is already cooked, you just want to marry the ingredients in the chapel of love (i.e. oven). 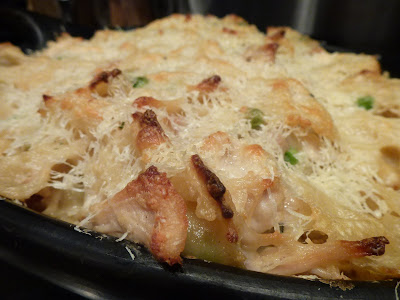 YUM.  Look how golden and crunchy that top is.  To die for. 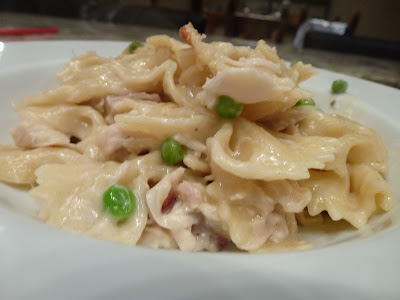 Look at that creamy goodness.  I left it out on the counter like Charlie's mom and he came home and just gobbled it up.  No plate necessary (this one was for me), he just leaned on the counter and ate it like he normally does.  What are your favorite culinary memories?  No time like Thanksgiving to reminisce.  Try it out and stay hungry!

Sautee pancetta in large pan until golden brown.  Remove.  Deglaze pan with 1 Tbs of sherry.  Add butter, melt.  Sprinkle flour and whisk to make rue.  Once thick and paste like, add milk, cream, and chicken stock and whisk.  Stir in half the parmesan.  Stir and thicken for 3-5 minutes.  Add remaining sherry and white pepper.  Stir in cooked al dente pasta to the sauce.  Add peas, turkey, and fold in pancetta.  Mix and add to a casserole dish and cook at 375 until golden brown, about 30 minutes.  Serve and enjoy!!
Pin It

at 11:25 AM
Email ThisBlogThis!Share to TwitterShare to FacebookShare to Pinterest
Labels: Hungry, Pasta, Thanksgiving, Turkey