Posted by Jaisa
I remember a conversation I had with my husband when we first started dating several years ago.  I was talking about Thanksgiving and how I couldn't WAIT to fill a big bowl with stuffing and gravy and plop on the couch and devour it. 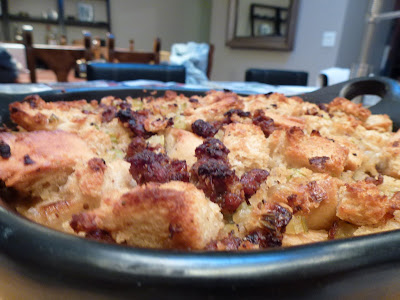 WHA-WHAT?  Could the perfect boyfriend sent by God have a fatal flaw?!  I had to investigate further.

"Well, I don't really like the pieces of celery and the other stuff like dried fruit and nuts."

Ah, there is hope, I thought.

See, several people "don't like stuffing" and I am convinced it's because, for them, the texture is off.  Either it's too dry or there is just too much stuff in it.  If you are one of those people, or are cooking for one of those people, try this recipe.  It is simple, flavorful, and moist.  Some of the finest things are the most simple of things and this is one of those recipes. 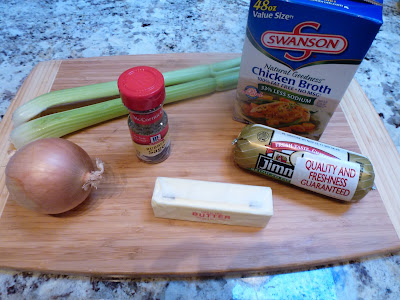 Now, I also understand that some people love dried cranberries, nuts, etc.  I personally prefer dried cherries and toasted pecans in my stuffing. However, in my household, that would go over like a lead balloon.  Treat this recipe as a base and add whatever you like.  The world is your oyster my friend, shuck accordingly.

Start with these ingredients: 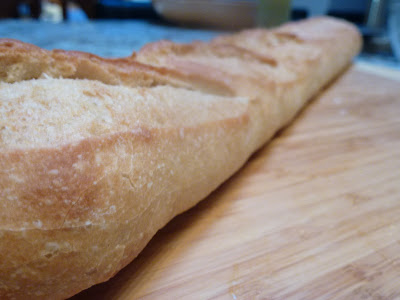 I forgot to add the bread to the first picture of the ingredients, orrrrrr it was too big to fit.  Yes, yes let's go with that.  My bread had been chillin' on the counter in the wrapper for 2 days.  3 is ideal, but 2 is just fine.

I use baguette bread because last year all I had in my house was a stale baguette that I forgot to eat, wilting celery, sausage (I always have sausage), butter (always have butter) and an onion.  STUFFING, I thought.  It was so delicious, I will never go back.  Of course, you can use croutons, or whatever you want. 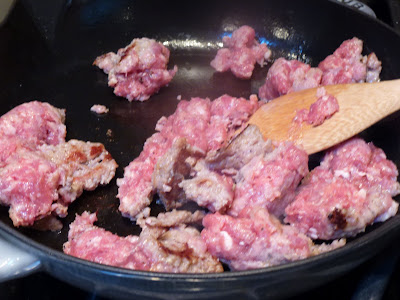 Add sausage to a skillet and cook over medium heat. WHAT?! Who said sausage? Me?  Couldn't possibly be me.  I hate sausage. NOT. 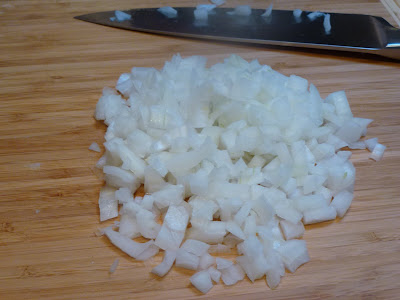 While cooking the sausage, cut your onion and celery.  Both should be about this size.  It doesn't have to be microscopic, but you don't want huge chunks either.  It should be small enough so both veggies can "melt" into the butter.  This is important because you want the celery FLAVOR but not the big chunks. 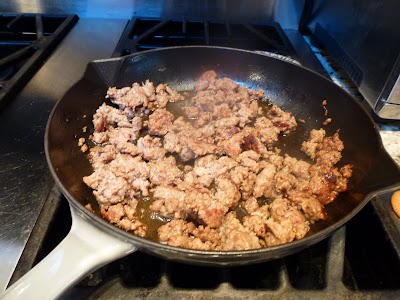 I use reduced fat sausage because I prefer butter fat over grease, but that's just me.  Use whatever sausage your little heart desires.  Once sausage is golden brown, deglaze the pan with a touch of water to pick up all of the yummy brown bits stuck to the bottom of the pan.  Transfer to your main mixing bowl. 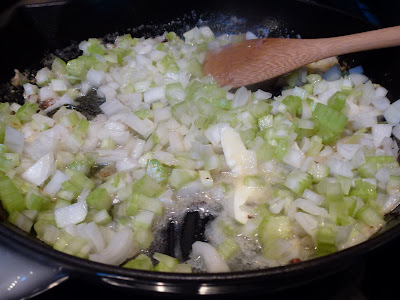 Melt 3/4 of a stick of butter into the (uncleaned) pan that cooked the sausage and add veggies.  I usually do a full stick of butter but now that I'm making this recipe public I was scared even Paula Dean would judge me.  I reduced it, and I actually noticed no difference.  SCORE. 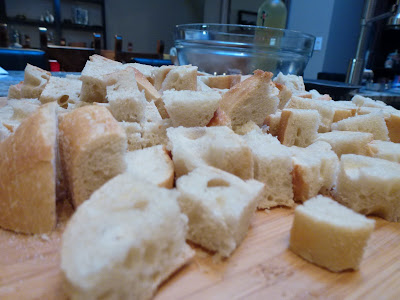 Cube your bread in 1 inch pieces.  I used a big scary knife to cut through it.  If it's stale enough it should cut easily. 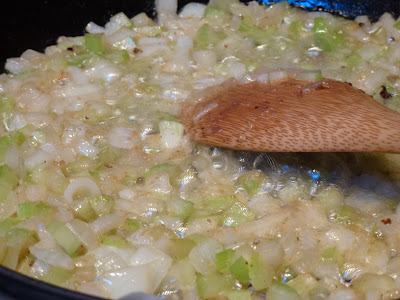 Ok, after 8-10 minutes over the heat, the veggies should be nice and melty and look like this. 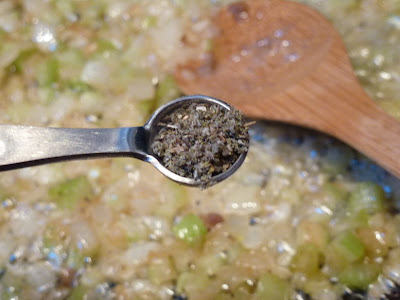 Add about a 1/2 teaspoon of sage to the veggies and mix.  I know I've added the right amount when I can smell it from the veggies cooking.  Experiment.  If you want a little more, add it a little at a time. 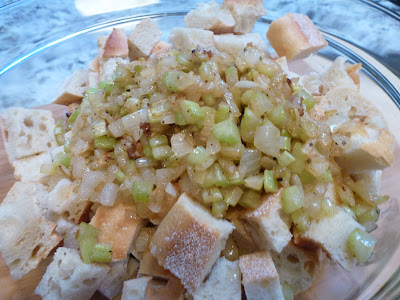 Throw your bread in with your sausage and add your veggies. 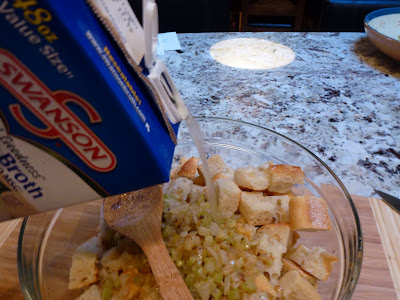 Again, I don't really measure anything, but I estimated I added about 3-3.5 cups of chicken broth.  Add a little at a time.  You want to soak the bread to its at capacity but you don't want any liquid left on the bottom. 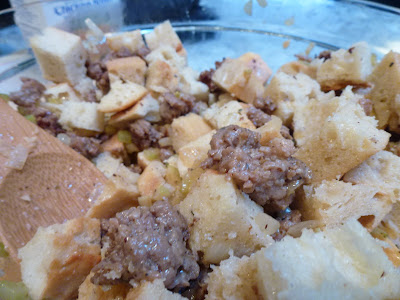 Mix everything together.  Let stand for a few. 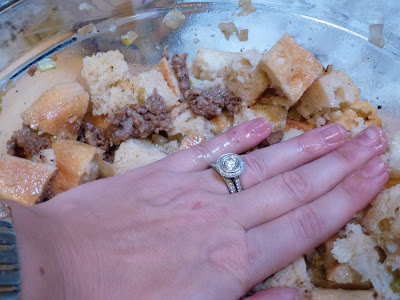 Now, gently press the stuffing down to help facilitate the absorption.  Don't press too hard, be gennnnntle here so you don't turn our BFF into mush.  Lightly press and lift, press and lift.  Dear Lord I need a manicure. 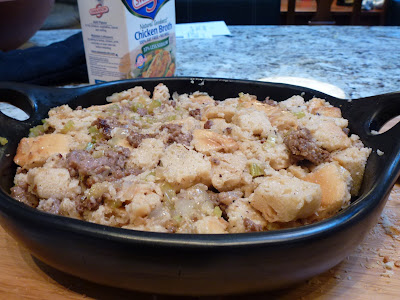 Move stuffing to a pan you can serve directly to your dinner table.  No sense in dirtying more dishes than necessary, especially on a day like Thanksgiving. 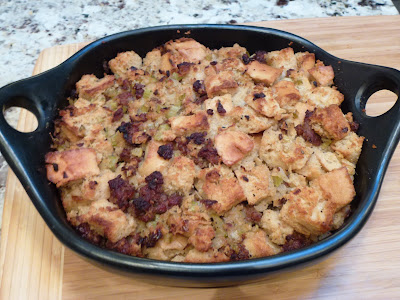 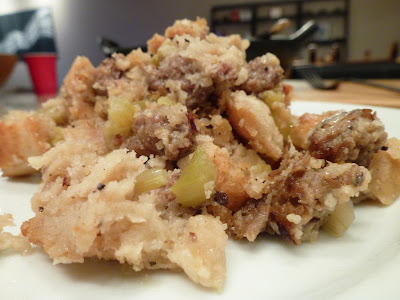 Stuffing is beautiful.  It is a work of art.  With this recipe, you can turn all of those haters into believers.  Sausage, butter, broth, bread...what else could you possibly need to be utterly thankful on Thanksgiving?  Eat up and stay hungry!

Cook sausage over medium heat until cooked through and golden brown.  Add a little water to the pan to deglaze.  Move sausage to mixing bowl.  Melt butter in same pan.  Finely chop onion and celery and add to the butter.  Cook over medium heat and stir frequently until veggies become very soft.  Add sage to veggies, stir.  Cube stale baguette into 1 inch pieces and add to the mixing bowl with sausage.  Finally, add the chopped veggies.  Give it a stir.  Add Chicken stock 1 cup at a time to allow bread to absorb.  Gently press the bread to help absorption.  Move to baking dish and bake at a 400 degree oven for 40-45 minutes or until golden brown.  Check it around 30 minutes and adjust your heat if it's getting too brown on top.  Enjoy!
Pin It

at 6:19 PM
Email ThisBlogThis!Share to TwitterShare to FacebookShare to Pinterest
Labels: Hungry, Side Dish, Thanksgiving