Posted by Jaisa
So the week between Christmas and New Years I'm going to try to be a little bit healthy.  I wish you knew the hilarity of me typing this.  Between me typing that first sentence and now, Charlie ordered Chinese.  It's the thought the counts. 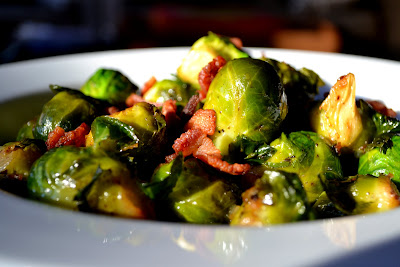 I LOVE greens.  Love em!  I know this sounds odd, but when I was younger I would sit on the couch with a bag of spinach and eat the leaves like potato chips.  I mean, don't get me wrong, I love me some potato chips, but after a few days of eating anything and everything that crosses my path, my body slams on the breaks and demands something healthy.  I'm fairly sure that this characteristic, and this characteristic alone, has saved my life. 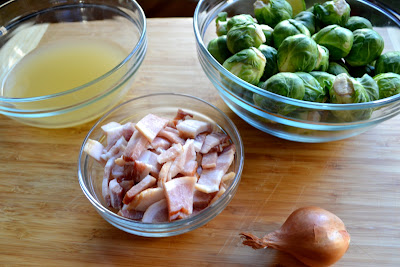 So eating greens doesn't have to be boring.  In fact, I pride myself on making vegetables taste good enough to eat as a main dish.  When I lived in Boston, my dinners would often consist of exactly this - greens such as broccoli rabe, Brussels sprouts, mustard greens, or spinach that would be simple and delicious.  They almost always included bacon but WHATEVER I'M TRYING OKAY?

Here are the ingredients for our dish today: 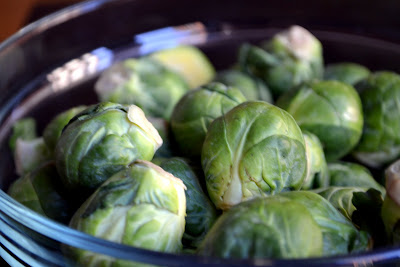 Brussels sprouts are delicious.  They are meaty, hold up to high roasting temps, and are totally versatile.  If you roast them, you will bring out this toasty nutty flavor.  Today, we will be sauteing them to achieve a soft texture that will go nicely with the crunchy bacon.  The ones I had were small enough to keep them whole.  If you have giant mondo ones, just cut them in half.

The best part?  They have very high anticancer properties.  Just make sure you don't boil them because that will basically diminish any healthy properties of the vegetable. 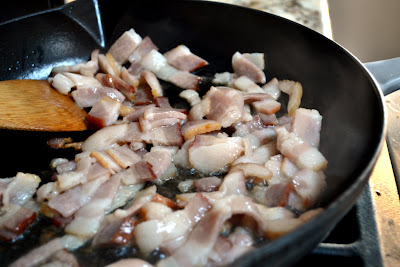 Chop up 3 slices of bacon and throw it into a pre heated pan.  Don't worry about using any olive oil.  The fat that renders out of the bacon will be plenty enough to cook the bacon in. 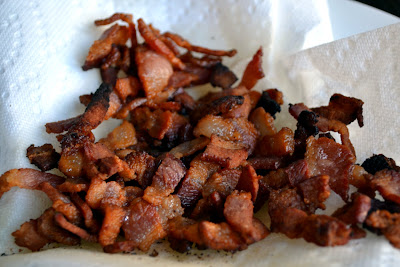 Once bacon gets nice and crispy, put it on some paper towels to drain any excess fat and put it outside or give it to your vegetarian neighbor to keep an eye on it for you. 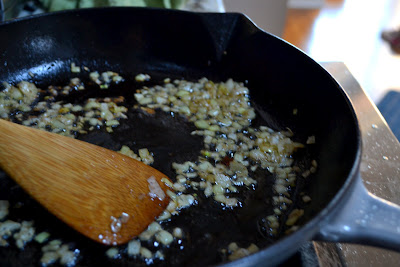 Drain basically all of the bacon fat and just leave enough to saute the chopped shallot in.  You really don't need more than a teaspoon or two. 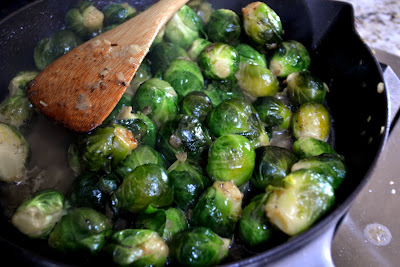 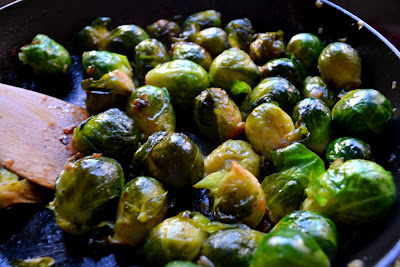 Let them cook for about 12-15 minutes on medium high heat until most of the stock has reduced off and sprouts are softened. 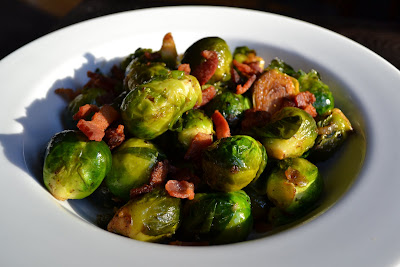 Add to a bowl of your choice and sprinkle bacon on top.  The crunch of the bacon is absolutely delicious with the tender sprout leaves. 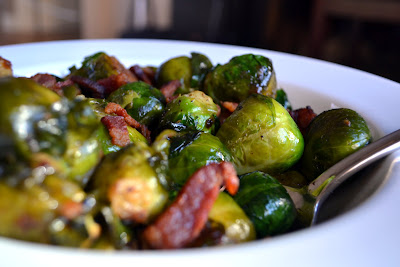 Give this a whirl and let us know what you think and stay hungry!

Cook bacon on medium high heat until golden brown.  Remove and drain on paper towels.  Drain fat and reserve about 1-2 teaspoons to saute shallots in.  Don't worry about measuring this part.  Just leave a little in the pan and that will be fine.  Add your chopped shallot and saute until nice and softened.  Add the sprouts and stir for 30 seconds or so.  Add chicken stock and let it reduce down until sprouts are softened.  If they aren't soft enough you can pop them in the oven or add some more stock to let it reduce again.  Move to a dish of your choice and sprinkle with bacon.  This makes about two servings.  Enjoy!
Pin It

at 7:00 AM
Email ThisBlogThis!Share to TwitterShare to FacebookShare to Pinterest
Labels: Bacon, Hungry, Side Dish