Posted by Jaisa
If only I could find the words to describe how good this was.  Even if I could, you wouldn't believe me. 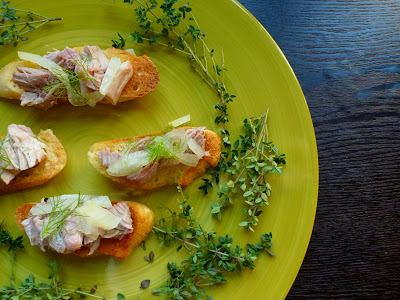 My husband said it was one of the best things I have ever made.  I agree.  I know I toot my own horn a lot, but this time it's actually deserved.  So you'll just have to make it.  Like right this second.  Not next weekend at your holiday party, not in an hour from now, make it right this instant.

There are two major components to this dish:  pickled fennel and the pork.  I'll show you how to make both. 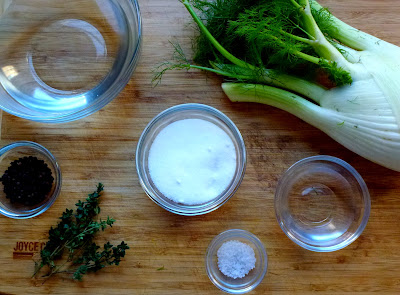 Here are the ingredients for the pickled fennel: 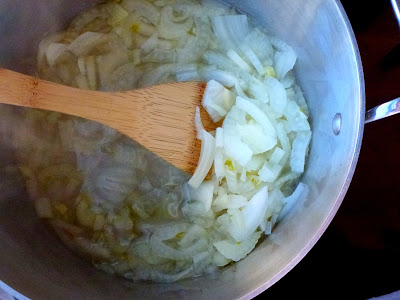 Throw all of the ingredients together, besides the fennel and heat up until it's simmering.  Add fennel and cook for two minutes and then remove from the heat.  I just made small slivers.  You could shave it if you want, but it's not totally necessary. 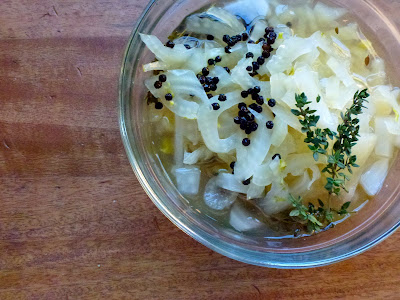 You can preserve this, but I didn't have a jar.  And we'll eat this in a week anyway.  I just threw the fennel in a glass bowl with peppercorns and plenty of fresh thyme.  You can make this a few days ahead of time if you want, but mine just chilled in the fridge for about an hour before I ate it and it was still delicious. 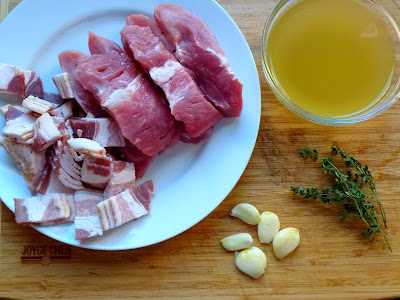 Now onto the pork.  When I recently had a porchetta sandwich, the main cut of meat was pork belly.  Pork belly and bacon are so delicious because of the fat content. Fat = flavor.  I grabbed a package of boneless pork spare ribs because the dark meat is super tender and this cut has higher fat content as well.  I didn't feel like going to the butcher for pork belly, so I just used bacon. 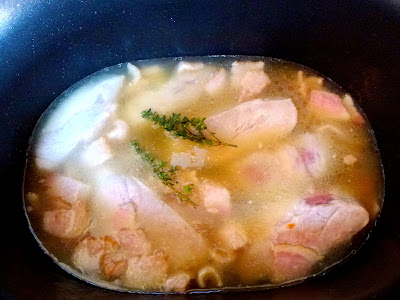 This is a loose interpretation of porchetta.  Porchetta is rolled and stuffed pork with tons of herbs.  I'm calling it porchetta, because it tastes like it.  It's a fattier cut of a pork that has a ton of flavor and melts in your mouth.  This does too.  Throw everything into a a slow cooker and braise it low and slow until fork tender.  About two and a half hours on high. 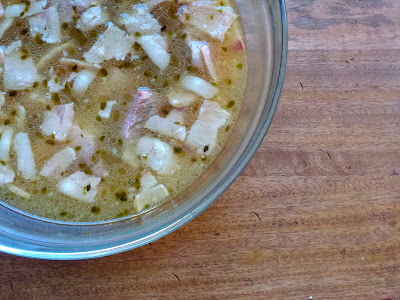 This broth by the way, holy cow.  While it was cooling on the counter I dunked in about half a loaf of a baguette and soaked it up.  OH MAN. 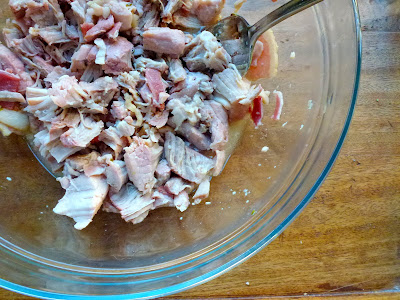 Shred the meat. You know what I did with the left over pork?  I made a grilled cheese with it and Swiss. 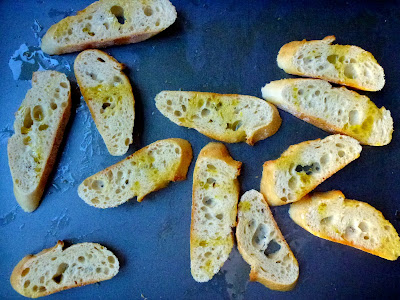 Toast some crostini with a drizzle of olive oil. 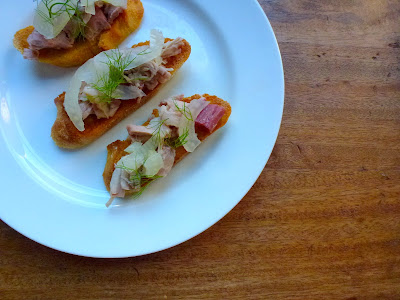 Now, add some of the pork and pickled fennel to the crostini.  Instead of herbs, I garnished each piece with some of the bright green fronds. 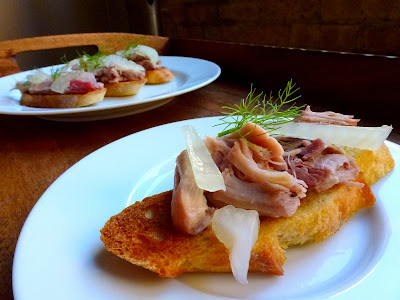 SO rustic.  SO bright.  SO carnivorous.  This is an appetizers that really celebrates pork.  I love that.

The pork is incredibly moist, flavorful and just melts in your mouth.  The vinegar from the pickled fennel adds the perfect touch to this bite.  The acidity cuts through the heaviness of the pork so even though this is a meaty dish, it still tastes very light. 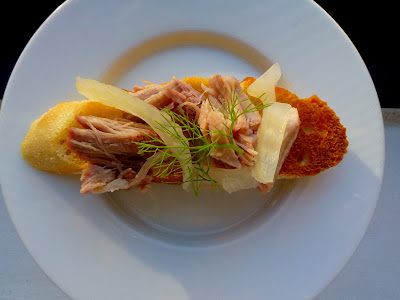 Yum.  I can't say enough about this.  Stay hungry!

Slice fennel thin.  Mix sugar, salt, vinegar, and water together over medium heat until simmering. Add fennel. Simmer over heat for 2-3 minutes.  Add fennel to storage container with thyme and black peppercorns.  Chill for at least an hour before eating.  Give the garlic a rough chop.  Add all porchetta ingredients to slow cooker and cook on high for 2-3 hours until pork is incredibly tender.  Cool pork in braising liquid.  Pull pork apart.  Slice baguette thin and drizzle with olive.  But under your broiler until crostini is lightly toasted.  Add pork, pickled fennel, and some of the fennel fronds to garnish.  YUM.  These will go fast.
Pin It

at 7:00 AM
Email ThisBlogThis!Share to TwitterShare to FacebookShare to Pinterest
Labels: Appetizers, Bacon, Hungry, Pork