Posted by Jaisa
Well now I should just be arrested.  But before you lock me up forever, let me just shove some of these in my pocket please.  It's only fair. 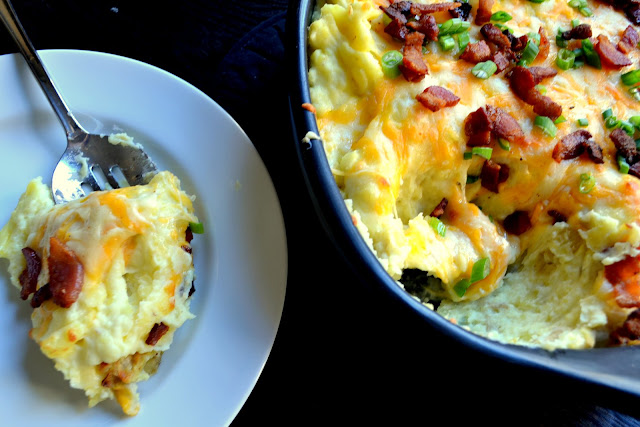 If I keep making food like this the local Weight Watchers group is going to chase me out of town with pitchforks and torches.  I can see it now.  I'll be trying to skewer hot dogs on the pitchforks to roast over their torches.  That'd really piss them off. 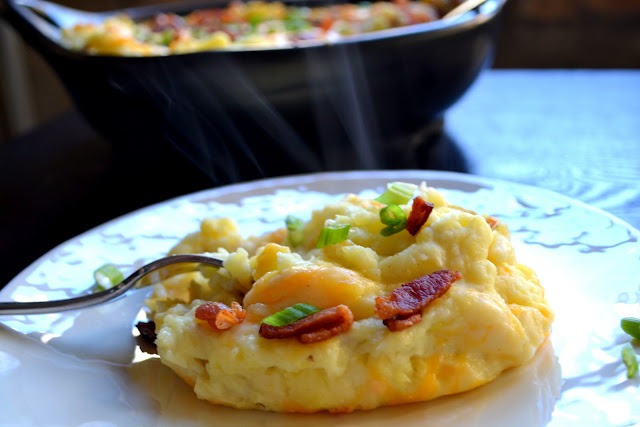 Oh man though.  Seriously.  These were SO good.  The perfect side to serve with steak, especially with the prime rib I posted yesterday. 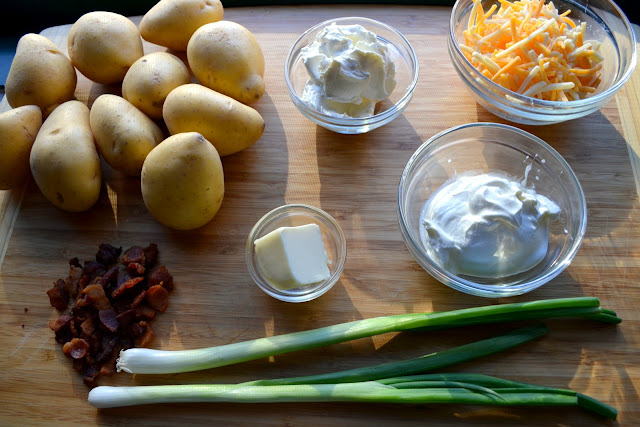 This is an adaptation of my Aunt Chrissy's mashed potatoes.  She doesn't put in that much butter.  It's all about the dairy.  Here are our ingredients: 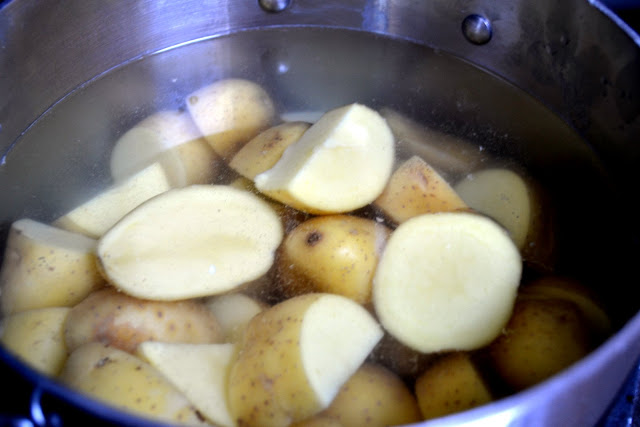 Start by quartering the potatoes.  I left the skins on because I wanted these to be as close to loaded baked potatoes as possible.  Leaving the skin on gives that chewy texture I love.  I would suggest using Yukon Gold potatoes because they have this creamy, velvety texture and the skins are delicate enough to leave on. 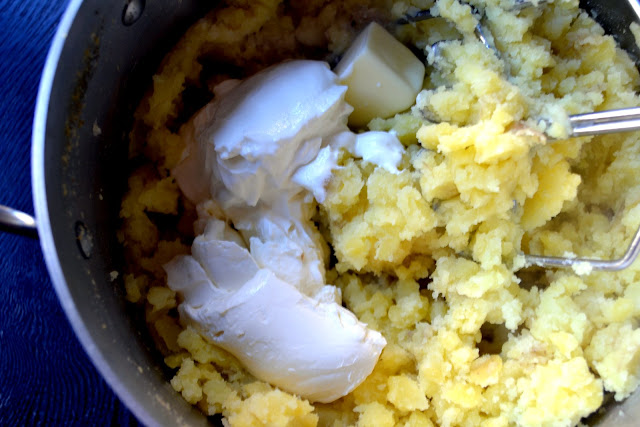 Once they have simmered and are tender, drain and remove from heat.  Add your sour cream, cream cheese, butter and some salt.   If it's too thick for you, you can add some milk, some half and half, whatever your little heart desires.  I also added some white pepper, but that's totally up to you. 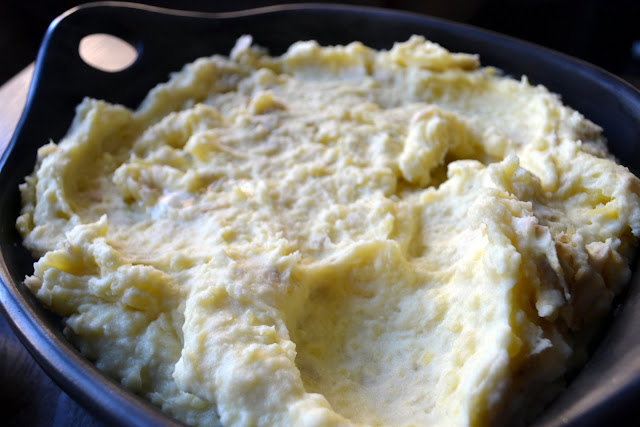 Get a casserole dish and load the potatoes up. 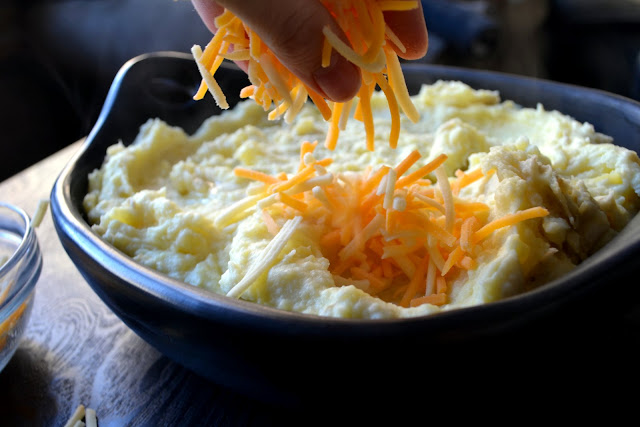 Sprinkle the cheddar on top. 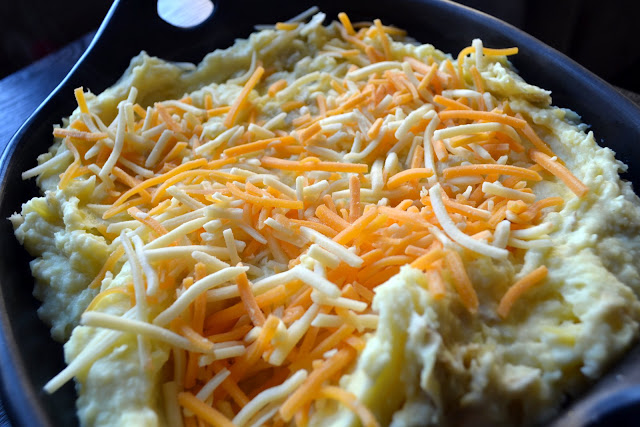 And place it like this into a 400 degree oven.  Cook until the cheese is totally melted and begins to get lightly golden brown in some areas. Maybe run in place or do push ups while it's cooking?  It's all about balance. 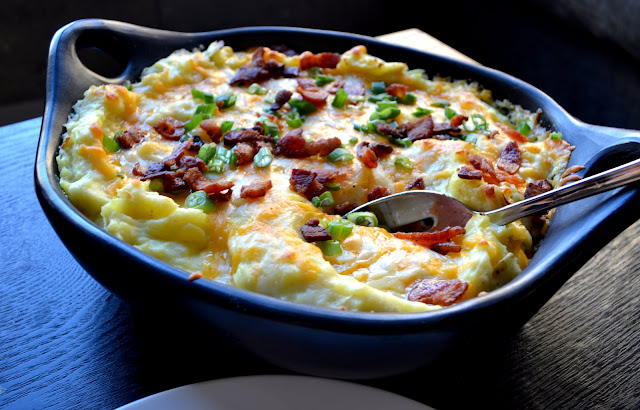 Once the cheese is nice and bubbly, remove it from the oven and sprinkle the cripsy bacon lardons and green onions on top.  This is identical tasting to the loaded baked potatoes you can get at restaurants, only better.  I swear.

What are lardons, you ask?  It's just a term for cutting pork, usually a fatty cut of meat like bacon or pork belly.  It's basically just strips instead of crumbles.  You can accomplish this by just cutting the bacon once side ways, instead of chopping it. 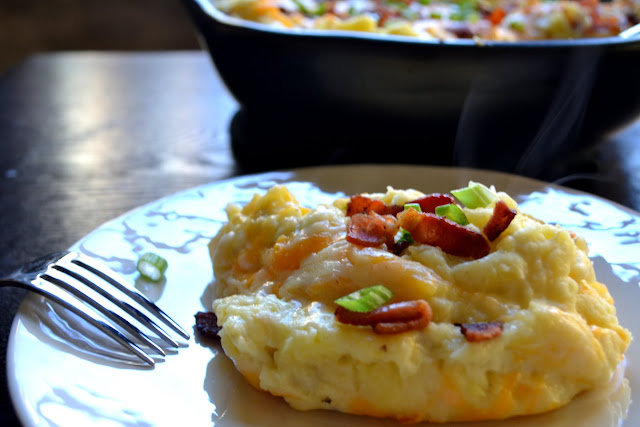 Simmer potatoes for 15-20 minutes or until fork tender.  Drain.  Add sour cream, cream cheese, butter, and salt.  Add pepper if you desire.  Mash until everything is blended.  If potatoes are too thick, add a splash of milk or heavy cream until desired thickness is reached.  Place potatoes in casserole dish.  Sprinkle cheddar cheese on top and bake in 400 degree oven for 15-20 minutes or until cheese is nice and melted.  Remove from oven and sprinkle bacon and green onions on top and serve immediately.  Enjoy!

at 7:30 AM
Email ThisBlogThis!Share to TwitterShare to FacebookShare to Pinterest
Labels: Bacon, Cheese, Christmas, Hungry, Potatoes, Side Dish